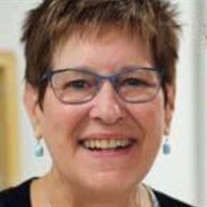 After a four year battle with ALS Laurel Beth VanHaitsma Kempkers aged 71 of Hamilton, formerly of Scottville, entered into the presence of her Lord and Savior on Friday, April 1, 2022. Laurel was born on August 28, 1950 in Chicago, IL, the daughter of Eugene and Adriana (Cook) Dekker and graduated from Homewood-Flossmoor High School with the class of 1968. Laurel continued her education at Hope College where she earned her Bachelor of Arts Degree in Education in 1972. On June 12, 1971, she married Ricky VanHaitsma in Homewood and they celebrated 42 years together before Rick preceded her in death on July 23, 2013. Laurel supported Rick as he served in his first pastorate at Beechwood Reformed Church in Holland. Here they celebrated the birth of their sons Bryan and Jared. The family moved to Mason County in 1987 when Rick became the Pastor of Mason County Reformed Church in Scottville. Along with her love of raising their sons, Laurel served as a Teacher’s Aide at Scottville Elementary School for several years before joining the teaching staff of the newly formed Covenant Christian School, where she taught for over 10 years. Along with teaching and supporting Rick in his ministry, Laurel served as a Tutor/Mentor for Kid’s Hope USA and was very active with the Hand2Hand ministry. She was also a member of the church vocal choir and handbell choir, and loved to spend time reading, walking, and always looking for ways to grow her faith and serve others. Early in her marriage Laurel worked at Prince Corp. in Holland. One of her co-workers at that time was Gordon Kempkers. After the death of both of their spouses they reconnected through mutual friends and their friendship grew stronger leading to their marriage on October 2, 2015. They celebrated 6 blessed years together and are faithful members of Overisel Reformed Church in Holland Laurel will be greatly missed by her husband Gordon Kempkers; her sons Bryan & Erika VanHaitsma of Ludington, and Jared & Lori VanHaitsma of Norwich, CT; Gord’s children Cobrun & Sarah Kempkers and Amber & Mitch Lohman all of Hamilton; their grandchildren Eben, Aliza, Rina, Nora, Micah, Zane, Aliyah, Declan, Natanyah, and Asher VanHaitsma, Nathan, Brenden, and Jesse Kempkers, and Azlan and McKoy Lohman; her sister Lynn & Edward Scheutzow of Homewood, IL; her brothers-in-law Dennis & Becky Kempkers of Hamilton, Larry & Sally VanHaitsma of Byron Center, and Dennis VanHaitsma of Holland; along with several nieces, nephews, cousins, and numerous great friends. Along with her husband Rick, Laurel was preceded in death by her parents Eugene and Adriana, and her grandson Shiloh. Services to celebrate Laurel’s life and love of her Lord and Savior will be held at 11:00 am on Wednesday, April 20 at Overisel Reformed Church in Holland and at 1:00 pm on Thursday, April 21 at Mason County Reformed Church in Scottville. Friends may greet her family on Tuesday evening from 6:00 – 8:00 pm at the Langeland-Sterenberg Funeral Home in Holland, and on Thursday from 11:00am – 1:00 pm at Mason County Reformed Church. Burial for Laurel will take place at Brookside Cemetery in Scottville. Those who wish to remember Laurel with a memorial donation are asked to please consider the Hospice of Holland; Love Inc. or the Campus Ministries of Hope College.

After a four year battle with ALS Laurel Beth VanHaitsma Kempkers aged 71 of Hamilton, formerly of Scottville, entered into the presence of her Lord and Savior on Friday, April 1, 2022. Laurel was born on August 28, 1950 in Chicago, IL, the... View Obituary & Service Information

The family of Laurel VanHaitsma Kempkers created this Life Tributes page to make it easy to share your memories.

Send flowers to the Kempkers family.