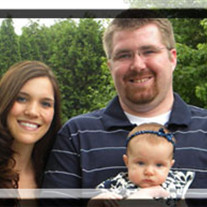 LEANNA'S STORY:Daughter, sister, wife, mother, runner, friend, child of God – Leanna Geers was an amazing woman, leaving a lasting imprint of her beautiful, energetic spirit with everyone she encountered along the way. Though the length of her life was much shorter than we would have chosen, the breadth and the depth of her life will leave a lasting legacy.Leanna was born in Ludington to Duane & Nia (Shoup) Wolf on July 12, 1984. They brought this baby girl home to Fountain to join her older sister Erika in their close-knit family. As they grew up together, Erika and Leanna shared a wonderful bond of sisterhood – as different as could be from each other, yet joined closely heart-to-heart. Leanna was a very active little girl – always, always exploring, eager to see what was next. She attended Mason County Central Schools and even in her elementary years, discovered how much she liked to run. She started competing seriously in seventh grade and her love of running only grew. Along with her joy in running, she developed into a fierce competitor, wanting to do and be the best. In high school, she achieved the recognition of being named to the All State Cross Country and Track teams, and was a member, along with her close friend Jenny Irwin, of the 2-Mile relay team that held the Class C State Record for Michigan for many years. During high school, Leanna began spending time with a young man, also an athlete and competitive spirit, named Eric Geers. They enjoyed an enduring friendship, which developed into a unique best friend relationship that has been a continual source of strength. After graduating from MCC with the Class of 2002, Leanna attended Ferris State University in Big Rapids, where she received multiple All American designations as a member of Bulldog Track team, running again with her friend Jenny, and earning her Associate’s Degree in Radiology. Leanna and Eric continued their relationship throughout their time in college. On May 31, 2008, best friends became husband and wife, a treasured gift in Leanna’s heart. She was alongside Eric as he received his degree as a Doctor of Chiropractic and was proud and excited to help him establish Geers Family Chiropractic in Fremont, where they made their home. Leanna worked at Spectrum Health Gerber Hospital as a sonographer and she and Eric became members of Second Christian Reformed Church. For Eric and Leanna, love grew even more in their lives when their daughter, Ava Nia, was born on February 26, 2010. Ava was a true joy of Leanna’s life. Second only to her love of being a wife, the role of mother was one she had anticipated eagerly and carried out faithfully.Leanna’s friends and family were blessed with her tremendous sense of humor. She was easily recognized by her smile and always-ready sense of fun and adventure. Not one to sit around, she was always on the lookout for something to be doing and found joy in the everyday moments of life. Leanna was “slow to anger”, but when it happened it was memorable, not only for its rarity, but also its intensity. But far more, Leanna had an amazing positive attitude. Even after her diagnoses with cancer and throughout the challenges it brought, she was always looking forward, seeking the good things along the way, setting the next goal to be accomplished.Through all of her life, Leanna’s family knew they were of the utmost importance to her. As a daughter and sister, her parents and Erika were held in high esteem. As a wife and mother, Eric and Ava held the biggest part of her heart and her love for them was boundless. As a daughter-in-law and sister-in-law she embraced this extended family and drew them in close as well. She thought of others and how things would affect them, concerned more for them than for herself, even to her last moments. Her family was everything to her and she wanted them to know how much she loved them. The outpouring of support and encouragement that they received in this journey is a testament to the impact that Leanna had all along the course she ran in her life.Leanna Lynn Geers finished this race on earth and began her race in heaven on Friday, February 25, 2011. Her enduring spirit and the gift of her smile will never be forgotten.Along with her beloved husband Eric and their daughter, Ava, Leanna ‘s love and memory will be kept by her parents, Duane & Nia Wolf of Fountain; her father- and mother-in-law Carl & Patti Geers of Scottville; her sister Erika and husband Paul Carlson of Indiana; her sisters-in-law Lauren, Carli, & Madison Geers, all of Scottville; her maternal grandmother Christa Shoup of Fountain; her maternal grandfather Roger Shoup of Port Huron; her paternal grandmother Bonnie Cory of Scottville; Eric’s grandparents Bernard & Joan Geers and Vern & Angie VandePol, all of McBain; Eric’s great-grandmother Margaret Spoor of Cadillac; and many aunts, uncles and cousins. She was preceded in death by her grandfathers Russell Wolf and Evart Cory and her nephew Owen Carlson.In her valiant battle over this past year, “Don’t cry for my pain, Smile for my strength” was Leanna’s heart cry, and she shared that strength and her faith with those around her. She surely knew the difficulties that were ahead, but she always relied on her faith and the hope of the possibilities along the way. As a child of God, she had the confidence to know that, regardless of when this battle finished, she would be at home in the presence of the Savior that she loved.

LEANNA'S STORY:Daughter, sister, wife, mother, runner, friend, child of God &#8211; Leanna Geers was an amazing woman, leaving a lasting imprint of her beautiful, energetic spirit with everyone she encountered along the way. Though the length... View Obituary & Service Information

The family of Leanna Geers created this Life Tributes page to make it easy to share your memories.

Send flowers to the Geers family.