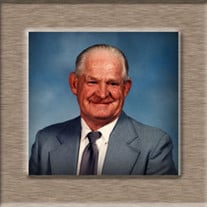 Lee Allen Bates Sr., aged 80 of Scottville, went home to be with his Lord on Monday, July 27, 2009. Lee was born on July 19, 1929 in Mason County to Rufus and Grace (Simmons) Bates, and attended Amber Station School. On October 14,1950 he married the woman he fell in love with at the 1949 Scottville Harvest Festival, Doris L. Henry. They celebrated 52 years together before Doris preceded him in death on December 10, 2002. They are now once again reunited . Lee worked for Hansen’s Dairy, Andrulis Cheese Factory, Ackensens Tool Box Factory, Springdale Farms, before retiring in 1993 from Oakview Medical Care Facility. In retirement he enjoyed returning to his favorite past time of working his family farm. Lee was an active member of Sugar Ridge Church of the Brethren in Custer. He and Doris always looked forward to volunteering at the West Michigan Fair for over 20 years, and were well known for their role as Santa and Mrs. Claus for local nursing homes, businesses, and community organizations. They loved meeting new people and making new friends. Lee devoted his love and heart to his beloved wife and family. Along with his wife, he was preceded in death by his parents, brothers Kenneth (June) Bates, Harold (Arlene) Bates, and Ray Bates, and his sister Hazel (John) Kukla, and his granddaughter Jaime Bates Trevino. Lee will be lovingly remembered by his children and their families Lee A. (Barb) Bates Jr. of Custer, David (Sheila) Bates, Debra (Andrew) Trevino, and Vern Bates all of Scottville, Lisa (John) Clark of Ludington, and Darla Kelly of Custer; 19 grandchildren, numerous great-grandchildren and step great-grandchildren; his brother Merle Bates; his sister Ruth (Carl) Moreen; and many nieces and nephews.

The family of Lee Bates created this Life Tributes page to make it easy to share your memories.

Lee Allen Bates Sr., aged 80 of Scottville, went home to be with...

Send flowers to the Bates family.