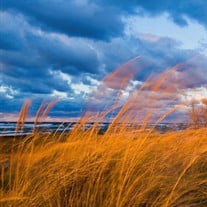 Lee Edward Charron, aged 84 of Scottville was born on March 24, 1936 in Grayling, the son of Liland E. and Myrtle Mae (Verlinde) Charron and God called him home to be reunited with his late wife Sandra on September 30, 2020. Lee was a loving brother, father, grandfather, and great grandfather. He was a man of great honor, and was a phenomenal carpenter. Lee’s passions included gardening, baking, bargain shopping and Keno. He had great love for the outdoors and looked forward to tackling any project put on his radar. Generous to a fault, Lee always looked for ways to make others smile. One of his greatest gifts was his extreme wit. He could drop a one liner like no other, and his sense of humor was second to none. Because he was so subtle - often several minutes would lapse before his words registered, and then the chuckles and smiles would appear at his keen and hilarious words. Lee will be missed greatly by all those who were lucky enough to be touched by his kindness. There is no doubt he is playing Keno and winning big in heaven. Enjoy endless milkshakes and fresh fruit in abundance. You were and will always be so loved. Lee was preceded in death by his wife Sandra Rose Charron and his parents Liland Edward Charron and Myrtle Mae Taylor. He will be greatly missed by his children Kenneth (Tess) Charron, Sherrie (Curtis) Elliott, Tracy Herms, David (Beth) Wiegand, Michael (Hoda) Whalen, and Becky (Rick) Skinner; his siblings Faron Merle Taylor of Johannesburg MI, Buddy H. Taylor of White Cloud, MI, Nona Lea (Thomas) Muckle of Spearfish, SD, Maryann (David) Schenke of Johannesburg, MI, and Lynne Elwin (Mary) Charron of Frederic, MI. Also remembering Lee are his 16 grandchildren and 13 great-grandchildren. . The Funeral Mass will be celebrated for Lee at 11:00 am on Friday, October 16 at St. Bernard Catholic Church in Irons with burial to follow at Lakeview Cemetery in Irons. Friends and Family may gather Friday morning from 10:00 – 11:00 am at the church. Those who wish to remember Lee with a memorial donation are asked to please consider Hospice of Michigan.

Lee Edward Charron, aged 84 of Scottville was born on March 24, 1936 in Grayling, the son of Liland E. and Myrtle Mae (Verlinde) Charron and God called him home to be reunited with his late wife Sandra on September 30, 2020. Lee was a loving... View Obituary & Service Information

The family of Lee E. Charron created this Life Tributes page to make it easy to share your memories.

Send flowers to the Charron family.