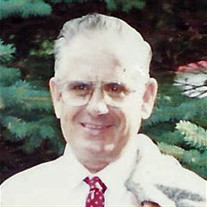 Lee George Mallison, aged 75 of Scottville passed away on September 7, 2017 at his home. Lee was born on October 15, 1941 to the late George "Vic" and Alvetta Mallison and graduated from Mason County Eastern High School in 1960. He enlisted in the U.S. Navy in 1961 where he served on the USS Hancock aircraft carrier during the Vietnam War. Upon his return from serving our country, Lee worked for Sealed Power in Muskegon, retiring in 2003. He then worked part time at Walmart in Ludington. Lee had a deep love for the outdoors and spent his free time with his children hunting, fishing, camping and canoeing the Pere Marquette River catching snapping turtles using only his hands. Lee married Joan (Berg) Fett in 1988 in Reno, Nevada and together they enjoyed traveling out west many times to explore some of our country's greatest destinations and landmarks. They also spent many years as seasonal campers at Timber Surf Campground on Round Lake in Fountain. After Joan passed in 2010, Lee spent his days driving the back roads and two-tracks of Mason County, visiting friends and relatives, and made daily stops at North Country Cafe. Lee is survived by his daughter Shelley Christmas, son Daniel "Booner" (Pam Schultz) Mallison, stepchildren Jeff (Deb) Fett, Jennifer (Scott) Sawyer, Jill Schoedel, Joy Fett, 17 grandchildren and 4 great-grandchildren. He is also survived by three siblings, Denis (Brenda) Mallison, Sharon Waldeisen, Ron (Alice) Mallison, numerous nieces, nephews, cousins and his Aunt Catherine Reeds. In addition to his parents and his wife, Lee was preceded in death by his brother John Mallison and stepson Jerry Fett. A memorial service with military rights for Lee will be held at 11am on Thursday, October 19 at Custer Riverside Cemetery with Reverend Norman Letsinger officiating. A luncheon and time for visitation will follow the service until 2pm at the Custer VFW Post 5096. Memorial contributions may be directed to his family to help with funeral expenses.

Lee George Mallison, aged 75 of Scottville passed away on September 7, 2017 at his home. Lee was born on October 15, 1941 to the late George "Vic" and Alvetta Mallison and graduated from Mason County Eastern High School in 1960. He enlisted... View Obituary & Service Information

The family of Lee George Mallison created this Life Tributes page to make it easy to share your memories.

Lee George Mallison, aged 75 of Scottville passed away on September...

Send flowers to the Mallison family.