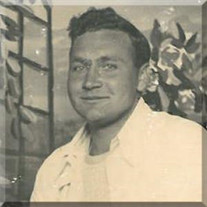 Leonard Peter Jankoviak aged 86, lifelong resident of Custer, passed away peacefully on Saturday, July 18, 2015 at Tendercare of Ludington. Leonard was born on June 4, 1929, the first American born member of the family, as both of his parents were Polish immigrants. He was born on the family farm in Sherman Township to Peter and Nellie (Wiokowski) Jankoviak, and attended the Reek School, just across the road from the farm. When Leonard first started school, he needed to learn the English language as Polish was the only language spoken at home. He later attended Scottville High School before serving his country during the Korean Conflict with the US Army. The importance of hard work was instilled at an early age for Leonard, as there were always chores to perform on the farm, where he worked until his call to serve. Upon his discharge from the Army, he returned home and learned the sheet metal trade in Muskegon, working as a “Tin Knocker” throughout the West Michigan area. He enjoyed deer hunting with his brother-in-law and buddy Harold Flewelling until his health no longer allowed, bowling, antique collecting and restoring his found treasures, and tinkering around the farm in his later years. On May 18, 1957, he married Faye Flewelling at St. Mary’s Catholic Church in Custer, and they have celebrated 58 blessed years together. Leonard was preceded in death by his parents, his brothers Richard Jankoviak, Florian and Norbert Kaminski, and his sister Phyllis Tolzdorf. Leonard will be greatly missed by his wife Faye, his daughter Mary Jo Jankoviak of Scottville, his grandchildren Nicole & Aaron Estes of Irons, Jordan & Jessica Riffle of Beaverton, his great-grandchildren Stella & Harrison Estes, his brothers-in-law Harry Tolzdorf of Alpena, and Harold (Ruth) Flewelling of Marblehead, Ohio, and several nieces, nephews, and cousins. Mass will be celebrated for Leonard at 11:00 am on Friday, August 7 at St. Mary’s Catholic Church in Custer with Rev. Dan DePew as celebrant. Burial with honor guard rites will follow at St. Mary’s Cemetery. Friends may visit with his family on Thursday evening, August 6 from 6:00 – 8:00 pm at the Stephens Funeral Home in Scottville where the Rosary will be prayed for Leonard at 7:30 pm. Those who wish to make contributions in Leonard’s memory are asked to consider the St. Mary’s Church Building Fund.

Leonard Peter Jankoviak aged 86, lifelong resident of Custer, passed away peacefully on Saturday, July 18, 2015 at Tendercare of Ludington. Leonard was born on June 4, 1929, the first American born member of the family, as both of his parents... View Obituary & Service Information

The family of Leonard Jankoviak created this Life Tributes page to make it easy to share your memories.

Send flowers to the Jankoviak family.