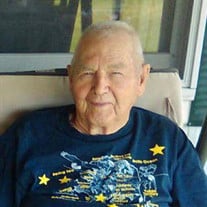 Lester Gordon Peterson aged 91 of Carr Settlement began his journey in Heaven on August 21, 2017 at 8:45 p.m. surrounded with love by his family at Grand Oaks Nursing Center in Baldwin. Lester was born on January 13, 1926 to Nels and Hilda (Larson) Peterson in his family’s log cabin in Carr Settlement. He grew up on the family farm and served his country, joining the Army on April 21st, 1944, before finishing high school. Lester served during WWII where he helped build and provide security for bridges and roads throughout Europe with the 1263rd Combat Engineer Unit. He later joined the United States Air Force as an airplane mechanic and crew chief for many types of aircraft over his 21 years of service during the Korean and Vietnam Conflicts. He met the love of his life, Margaret Ann Brown, a beautiful young WAF (Women in the Air Force) while stationed in San Antonio, Texas. They met, fell in love, and were married in less than three weeks in Natalia, Texas on August 29, 1952. Lester’s military career took them all over the world. He and Margaret were blessed with three children Linda Diane, Donna Marie, and Ronald Lynn. Lester retired from the Air Force in January 1968 and returned to the Peterson Centennial farm that belonged to his grandparents, where they raised their family. He worked for the Lake County Road Commission, retiring after 20 years of service. Lester has been an active and highly respected member of his community and loved by all that came across his path. He was one of a kind. No one could tell a better story or enjoy a good joke, even his own. He was the epitome of a husband, father, grandfather, great-grandfather, son, uncle, brother, and a friend. His loving spirit, kindness, honesty, gentle ways, and joy-filled life were appreciated by all. Lester is survived by his one true love, wife Margaret, and his children Linda Diane Carroll and husband Steve of White Cloud, Donna Marie Austin and husband Scott of Algoma, WI, and Ronald Lynn Peterson and wife Lisa of Valley Springs, CA. He is also survived by his six grandchildren Karen Whelpley, Michelle (Jason) Austin-Willard, Kathy (John) Smith, Bob (Jennie) Beemer, Connie Austin, and Scott Peterson, his ten great-grandchildren: Alecia, Emily, Austin, Genevieve, Jacob, Avery, Joey, Bethany, Maggie, and Noah, his loving nieces, nephews, cousins, and his loving family of friends. Lester was preceded in death by his parents, Nels and Hilda, his brother Frank, sisters Caroline and Helen, and nieces Bonita and Pat. A Memorial service will be held for Lester at 11:00 am on Monday, August 28 at Evergreen Covenant Church, 7396 S. Evergreen Rd. Branch with Pastor Keith Foisy officiating. Burial will follow with honor guard rites at Evergreen Cemetery and a luncheon will take place at the Peacock VFW Post 5315 in Baldwin afterwards. Friends may meet with his family for a time of visitation on Monday morning from 10:00 am until time of service at the church. Those who wish to make a donation in memory of Lester are asked to consider Grand Oaks Nursing Center in Baldwin, the Honor Flight for WWII Veterans, or the Lake County Historical Society.

Lester Gordon Peterson aged 91 of Carr Settlement began his journey in Heaven on August 21, 2017 at 8:45 p.m. surrounded with love by his family at Grand Oaks Nursing Center in Baldwin. Lester was born on January 13, 1926 to Nels and Hilda (Larson)... View Obituary & Service Information

The family of Lester G. Peterson created this Life Tributes page to make it easy to share your memories.

Send flowers to the Peterson family.