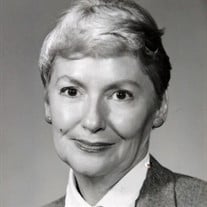 Lewellyn “Lu” Frances Schwikert of Baldwin, MI, passed away in her loving home on Friday, November 17, 2017 at the age of 86. Lewellyn was born on December 15, 1930 to William and Mildred (Helbig) Knifke in Squirrel Hollow, PA. On February 12, 1972, she married the love of her life Richard “Dick” Schwikert in Kalamazoo, MI and celebrated 45 years by each other’s side. Lewellyn worked as an Event Marketing Manager for the UpJohn Company in Kalamazoo for over 25 years, retiring on January 1, 1986. Lewellyn and Dick moved to their home on the Pere Marquette River in Baldwin where she enjoyed her love of gardening, music, and caring for her many beloved pets. She could most often be found strolling through the woods adoring the wildlife on their property while trays of fresh baked cookies were cooling on the stove for all her loved ones. Lewellyn will be greatly missed by her children Cynthea Whitledge of Schoolcraft, MI, Yvonne “Lizz” Coates of Portola, CA, David Carlson of Wondervu, CO, Michelle Coleman of Chatham, MI, Cheryl Anguiano of Bay City, MI, and Kristen Fillar of Portage, MI. Lewellyn will also be remembered by her 8 grandchildren, Trevor, Larkin, Lindsey, Taylor, Kelsey, Usher, Sydney, Carson and her 4 great-grandchildren. A Memorial Mass will be celebrated for Lewellyn at 12:00 noon on Friday, December 15 at St. Ann's Catholic Church in Baldwin with visitation starting at 11:00 am. Those who wish to remember her with a memorial donation are asked to consider the Homeward Bound Animal Shelter in Manistee, or the Pere Marquette Watershed Council.

The family of Lewellyn Francine Schwikert created this Life Tributes page to make it easy to share your memories.

Lewellyn “Lu” Frances Schwikert of Baldwin, MI, passed away in...

Send flowers to the Schwikert family.