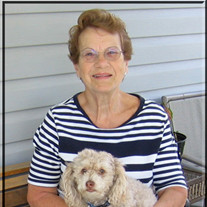 LOIS' LIFE STORY:Lois returned home to her Lord and Savior on Saturday, December 8, 2012. Her life ended in the same peaceful manner as it began, with her joyous smile lighting up the lives of those who cared for her. The staff of Nottingham... View Obituary & Service Information

The family of Lois E. Barnett created this Life Tributes page to make it easy to share your memories.

LOIS&#39; LIFE STORY:Lois returned home to her Lord and Savior on...

Send flowers to the Barnett family.