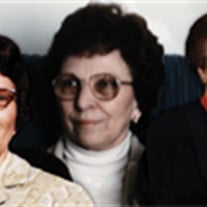 There are more popular professions in the world, more prosperous professions, but there are no nobler professions than that of a teacher. Teachers help shape our minds, our lives and our dreams, through their effort and inspiration. Lois Buck spent her whole life teaching others. She was a wonderful wife, mother and grandmother, and a beloved teacher to countless children over her lifetime. Today her lessons live on in all who knew her.Lois’s story began on a cold winter day in 1924, in the rolling farmland of Hesperia, Michigan. Those were good days in this country, the heyday of the Roaring 20s, when Big Bands were king, and Prohibition was the law of the land. On February 11, 1924, Harvey and Jessie (Bunting) Thompson celebrated the birth of a beautiful baby girl, a daughter they named Lois Jean.Lois was joined by her sisters Edith, Laurie, Vera Jane, and Loula, and her brother Norm, who had the misfortune of being the only son on the family farm. There was plenty of work to go around, of course, and everyone had to do their fair share, including Lois.Lois was influenced by both her parents equally growing up, from learning the meaning of hard work from her farmer father, to the value of education from her schoolteacher mother. She also learned to play the piano when she was a youngster, which she enjoyed when she wasn’t working or studying.Of course, it seemed as though Lois was always studying, and she even graduated from Hesperia High School a year early, with the Class of 1941. Diploma in hand, Lois headed off to Oceana County Normal School, to pursue her teaching certificate, following in her mother’s footsteps.Lois began her long and illustrious teaching career at several rural schools throughout Oceana County, all the while furthering her own education at Western Michigan University. Eventually, she earned her Master’s degree in Education from Western.Lois learned a little something about love as a young woman, too. She had gone to high school with a handsome young man named Darwin Buck, and they attended many of the same functions together during high school and even afterward. Eventually, though, their relationship became more serious, and the two friends became a couple. They were married on January 20, 1945, in Hesperia, before settling on a farm in rural Mason County, at Carr Settlement.Lois continued her teaching career at Mason County Schools, especially Carr and Ruby Creek, while her new husband worked as a farmer in addition to his job at Baldwin Packing Material. It wasn’t too long, however, before the couple became parents, as well. Their daughter Kathy was born in 1948, though she sadly died just two days after birth. In 1951, they tried again, this time blessed with a happy, healthy baby boy they named Michael. Their beautiful daughter Rebecca rounded out the family in 1952.The family did much together, and every summer they went camping in beautiful spots around the country. They camped at Niagara Falls, Mackinac Island, and other places around the Midwest, too. The holidays were also important times in their home, when Lois invited the whole family over for her trademark feasts, complete with fresh-baked pies and her world-famous homemade noodles.Lois was a wonderful wife and mother, who was a very caring and nurturing parent. She and her husband instilled a tremendous work ethic in their kids, as well as the family values they both held so dear. Family was most important to them, above all.Of course, Lois also instilled a love of learning in her children, and taught them the value in a good education. Both Mike and Rebecca went on to become educators, as well, just as many of their family members have.Lois’s teaching career spanned more than four decades, starting with the tiny, one-room rural schools in Oceana and Mason Counties. When the rural schools in Mason County became consolidated into the public schools, Lois finished her career at Mason County Central Middle School, serving as a teacher for 28 years.When she finally took her much-deserved retirement, Lois and Darwin enjoyed traveling all over the United States together, including Hawaii and Alaska, and went with many tour groups, as well. Lois also enjoyed several hobbies, especially crocheting Afghans, quilting, gardening, and playing her piano. Yet most of all, she enjoyed spending time with her family, especially her grandchildren, who she wanted to see as often as possible.Lois began suffering from Alzheimer’s disease in the early 2000s, and she eventually needed to move to the Ludington Woods Living Center to get the proper care. Her husband Darwin faithfully cared for his beloved bride every day, which meant so much to her.Sadly, Lois died at Ludington Woods on Monday, October 15, 2007, at the age of 83.Lois was such a wonderful woman, who lived a wonderful life, a life devoted to teaching others. Lois was a wonderful wife, mother and grandmother, and a beloved teacher and mentor to countless children over her lifetime. Today her life, and her lessons, live on in all who knew her. She will be greatly missed.She was preceded in death by her parents, her daughter Kathy, her sisters Edith Wyskoff, Laurie Cauphlin, Vera “Jane” Ford, Loula Thompson, and her brother Norman Thompson. Lois will be lovingly remembered by her husband of 62 years, Darwin; her son Michael (Leslie) Buck of Crystal Lake, Illinois, her daughter Rebecca Goosen of Houston, Texas; her grandchildren Kristin Buck, Ryan (Jamie) Buck, Ensign Andrea Buck USN, Stacey (James) Pate, Gregory Goosen, and Tracy Goosen; and her great-grandchild Addison Buck.

There are more popular professions in the world, more prosperous professions, but there are no nobler professions than that of a teacher. Teachers help shape our minds, our lives and our dreams, through their effort and inspiration. Lois Buck... View Obituary & Service Information

The family of Lois Jean Buck created this Life Tributes page to make it easy to share your memories.

There are more popular professions in the world, more prosperous...

Send flowers to the Buck family.