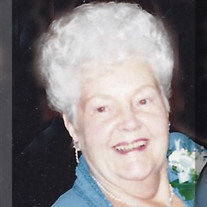 LOREE'S LIFE STORY:Loree Elise O’Keefe, “Mom” too many, aged 87 of Appleton, Wisconsin passed away peacefully early Thursday morning on May 30, 2013. Loree was born on August 6, 1925 in Ludington to Rudolph and Odessa (Shirley) Wicklund, and grew up in Scottville with her sisters Phyllis, Donna, and Leona. She attended Scottville High School, where she was a member of the band. She first played the trombone, but didn’t really care for that so she switched to the saxophone. Her years in band fostered her love for jazz and big band music, which brought great comfort in her last days.Early in her life, Loree worked in retail in Grand Rapids and Chicago. While in Chicago, she met a young man by the name of Eugene O’Keefe, marrying on February 23, 1957. Together they brought four beautiful children into their lives Michael, Sandy, Timothy, and Amy. They shared each other’s company side by side for 38 years until Eugene preceded her in death in 1985. Sadly, Loree was also preceded in death by her sons Michael & Timothy, and her daughter Sandy.Returning to the Scottville area, Loree worked several years at Ludington Beverage for the Reed family. Loree truly treasured her time there, as they were her most favored employers, feeling more like family.Loree “Mom” was a compassionate and spiritual woman who endured life’s trials and tribulations with dignity and grace. She was definitely a people person who enjoyed the company of her family, friends, and neighbors, old and new, and liked planning family gatherings at “the Big House,” attending church events, excursions to the casino, volunteering for many organizations especially the Special Olympics, and travels that included Vermont, Florida, Colorado, Missouri, and the Caribbean.As her health became more of a challenge the last few years, Loree moved to Wisconsin to live with her daughter Amy and her husband Kevin, and was blessed with great joy in the company of her granddaughters Elizabeth and Katherine.Along with her husband and children, Loree was preceded in death by her parents, and her sisters Phyllis Ashley, Donna Barnett, and Leona Corlett. Loree will be greatly missed by her daughter Amy Galoff and husband Kevin, of Appleton, WI, her beloved granddaughters Elizabeth and Katherine, and several nieces and nephews. Funeral services will be held for Loree at 12:00 noon on Thursday, June 6 at the Scottville United Methodist Church with Rev. Jack Conklin officiating. Burial will take place at Brookside Cemetery. Friends may meet with her family for a time of visitation on Thursday morning from 11:00 AM until time of services at the church. Those who wish to make memorial contributions are asked to consider Special Olympics Michigan – Mason County Area 24, Central Michigan University, Mt. Pleasant, MI 48859 in the name of Loree O’Keefe memoriam.

The family of Loree Elise O'Keefe created this Life Tributes page to make it easy to share your memories.

Send flowers to the O'Keefe family.