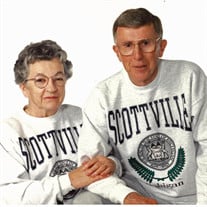 Loretta Catherine Nichols aged 94, lifelong resident of Scottville passed away peacefully on Saturday, January 16, 2021 at Ludington Woods Living Center. Loretta was born on March 11, 1926 in Scottville, the daughter of John “Jack” and Orpha (McDonald) Rogers and graduated from St. Simon Catholic High School with the class of 1944. On August 21, 1948, Loretta was wed to Thomas F. Nichols at St. Jerome Catholic Church and they celebrated 56 wonderful years together until Tom preceded her in death on May 3, 2005. Tom and Loretta loved Scottville and were very involved in the community. Tom was a member of the Scottville Optimist Club which meant Loretta helped at so many of the club events, you could have listed her as a member also. They volunteered at the Harvest Festival and Chicken BBQ every year and their store, Nichols Drug Store, was usually one of the top sellers of Rubber Duck Race tickets. Operating the Drug Store for over 52 years, Tom and Loretta were voted “Business of the Year” twice and awarded “Citizens of the Year” in 1999 where they also served as Grand Marshall’s for the Harvest Festival. Her faith was the driving force in her life as Loretta was a longtime member of St. Mary’s Catholic Church in Custer and attended daily mass throughout the week at St. Jerome’s in Scottville. She was also an active member of the St. Rose Altar Society. Her family meant the world to her, especially her grandchildren. When everyone would be out skiing in the winter or sailing in the summer, Loretta was the official “Lodge Sitter” caring for the kids and making sure everything was prepared for when the group returned to get warm or fed. Along with her beloved Tom, Loretta was preceded in death by her parents, and her sisters Margaret Hausler, Rose Mary Boone, and Rita Wadel. Loretta will be greatly missed by her children Christine (Mark) Buck of Pentwater, Stephen Nichols of Ludington, James (Mary) Nichols of Scottville, and John Nichols of Denver, CO; her grandchildren Gabe Nichols of Bryan, OH, Josh Nichols (Samantha Yennior) of Scottville, and Lee (Ellisa) Buck of Pentwater; her precious great-grandchildren Avalon, Zoee, Ryah, Mason, and Wyatt; along with numerous nieces and nephews and many great friends. The Mass of Christian Burial will be held for Loretta at 11:00 am on Saturday, May 8, 2021 at St. Mary’s Catholic Church in Custer with Rev. Daniel DePew as celebrant. Burial will follow at the Pere Marquette Cemetery in Ludington. Friends may greet her family on Saturday from 10:00 am until time of Mass at church. Those who wish to remember Loretta with a memorial donation are asked to consider Caritas Food Pantry at St. Mary’s Catholic Church.

The family of Loretta Nichols created this Life Tributes page to make it easy to share your memories.

Send flowers to the Nichols family.