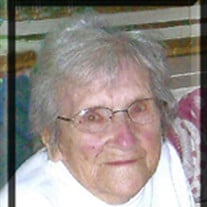 Mabel M. Tallquist, aged 96 of Custer, passed away peacefully surrounded by her children on Wednesday, April 2, 2014. Mabel was born on August 29, 1917 in Branch to Frank L. and Frances (Tyndall) Miller, and graduated from Scottville High School with the class of 1936. On September 30, 1937 she married Francis Tallquist and they celebrated 47 years together before Francis preceded her in death in 1984. Mabel worked many years on the canning line for Stokely’s both in Scottville and Hart, and had been a member of the Fern Community Club. She loved to spend time gardening and caring for her pets, especially her cats, but her greatest joy came in the presence of her family. Along with her husband Francis, Mabel was preceded in death by her parents, her son-in-law Charles Switkovitz, her little sister Carol Miller, her sister Vera Peterson and husband Frank, her brother Robert Miller and wife Lucille, and her sister-in-law Joan Miller.Mabel will be lovingly remembered by her children Carol Switkovitz of Custer, David Tallquist and wife Janice of Rothbury, Ellen Shoup and husband David, and Ronald Tallquist all of Custer, her grandchildren Linda Soblewski and her companion Tim Stargaard of Scottville, Charles and Lisa Switkovitz of Muskegon, Michelle and Peter Seidel of Honolulu, HI, Patrick and Jennifer Tallquist of Whitehall, Brant and Stephanie Tallquist of Rothbury, Debra and Pat Obetts of Zeeland, Wendy Kenney and fiancé Will Leonard of Jenison, Dawn Kenney also of Jenison, Ronald and Teresa Tallquist II of Fountain, and Jessica and Kevin Burmeister of Shelby, 20 great-grandchildren, 6 great, great-grandchildren, her brothers Kenneth Miller of Pentwater, and Jim Miller of Scottville, her sister Joyce Belke and husband Jim of Jenison, and many nieces and nephews.

Mabel M. Tallquist, aged 96 of Custer, passed away peacefully surrounded by her children on Wednesday, April 2, 2014. Mabel was born on August 29, 1917 in Branch to Frank L. and Frances (Tyndall) Miller, and graduated from Scottville High School... View Obituary & Service Information

The family of Mabel Maxine Tallquist created this Life Tributes page to make it easy to share your memories.

Send flowers to the Tallquist family.