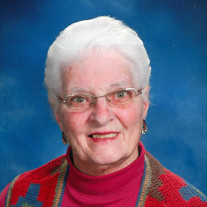 Margaret Dahlberg aged 84 of Ludington passed away on Sunday, August 16, 2020 surrounded by the love and support of her family. Marg was born on September 26, 1935 in Chicago, Illinois, to two English immigrants, Arthur and Alice Bird. She graduated from Chicago’s South Shore High School, where she was varsity swim team captain. After graduation she went to secretarial school like so many other women of her generation. While working as a secretary at the Solo Cup Corporation she met the love of her life, Bill Dahlberg. They were married in 1960 and shared almost 30 years of wedded bliss before Bill preceded her in death in 1989. Upon retirement, Marg found new companions in her two Shih Tzu’s “Daisee Mae” and “Lil Abner.” While living in Chicago, Marg was an avid road cyclist, having logged more than 10,000 miles across mountains, rivers, and the Great Plains. Bicycling was an escape for her, where she could leave the stress of city life behind and escape into the natural beauty of God’s earth. She often reminisced about her travels through the Canadian Rockies, Yosemite National Park, Niagara Falls, and the Upper Peninsula. Her favorite annual ride was the Hilly Hundred in Kentucky. She was also an avid reader and gardener, having spent many long hours either with her nose in a book or hands in the dirt. Sometime her nose was in a book about dirt. Marg had been a life-long member of many Episcopal churches, most recently at Grace Episcopal in Ludington, since moving to the area in 2008. She enjoyed the fellowship of serving on the vestry and alter guild and was always one to lend a hand where needed. Marg is survived by her son John Dahlberg of Ludington and her grandchildren, Averey Dahlberg and Connor Dahlberg, both of Ludington. Marg was preceded in death by her parents Arthur and Alice Bird, her husband Bill Dahlberg, and daughter Cynthia Lindmark. A Celebration of Life will be held for Marg when it is safe to gather at a time and date to be determined. There will be a private internment ceremony next to her husband Bill in Glen Oaks Cemetery, Hillside, Illinois. The family would like to thank the doctors, nurses, and staff of Spectrum Health Ludington Hospital 2N for their loving care and support of Marg and her family. In lieu of flowers, memorials in memory of Marg can be given to Mason County District Library or St. Jude Children’s Hospital.

Margaret Dahlberg aged 84 of Ludington passed away on Sunday, August 16, 2020 surrounded by the love and support of her family. Marg was born on September 26, 1935 in Chicago, Illinois, to two English immigrants, Arthur and Alice Bird. She graduated... View Obituary & Service Information

The family of Margaret A. Dahlberg created this Life Tributes page to make it easy to share your memories.

Margaret Dahlberg aged 84 of Ludington passed away on Sunday,...

Send flowers to the Dahlberg family.