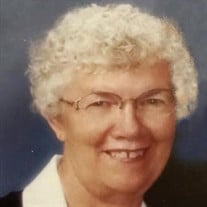 Margaret Ann Peterson (Brown) was born on May 20, 1934 in Cheyenne, Wyoming. On July 13, 2020 she was reunited in Heaven with her beloved husband of 65 years, Lester. Margie's father worked for the railroad, which allowed them the opportunity to live in different parts of the country. She spent her early childhood in San Francisco, CA and moved to Batesville, Arkansas when her father retired. Margaret was the co-valedictorian of her high school and an active member of their basketball team. Upon graduation, she planned to enlist in the United States Air Force, but her principal and favorite teachers pleaded with her not to go because only “naughty” girls joined the service. Her heart was set on serving her country, and she enlisted in the Air Force on May 30, 1952. While stationed at Kelly Air Force Base in San Antonio, Texas, she met a dashing young Sargeant named Pete, around mid August. They were buying birthday cards for their mothers (which happened to be on the same day, August 24). He asked if she liked watermelon and took her to his favorite fruit stand. They dated for about a week when he took her swimming and kissed her under the water. She came up spluttering and asked what kind fool does that. He told her, a man in love and he asked her to marry him. They were married in Natalie, Texas on August 29, 1952. When the pastor asked, “Lester, do you take Margaret…” She asked, “Is that your name, I thought it was Pete.” That was the start of 65 adventure filled years together. After a year of not being able to get stationed together, Margaret discharged out of the service in 1953 and joined “Pete” in California. Two years later, they began their family, and Margaret became the mother that every child wishes they had. Their military travels took them all over the world. She was always the adventurist and backbone of the family and Margaret had a knack for turning friends into family with her love and joy filled spirit. Her many talents included cooking, canning, crocheting, sewing, gardening, fishing, and painting the wood projects they made in their wood shop. Her hands were always busy, and her heart was wide open for her family and friends. Margaret will be greatly missed by her children Linda (Steve) Carroll, Donna (Scott) Austin, and Ron (Lisa) Peterson; her grandchildren Karen Beemer, Michelle (Jason) Austin-Willard, Kathy (John) Smith, Bob (Jennifer) Beemer, Connie Austin, and Scott Peterson; great-grandchildren Alecia, Emily, Austin, Joe, Genevieve, Bethany, Jacob, Avery, and little Lester; a great, great-granddaughter Adelaide, and her beloved nieces and nephews. Margaret was preceded in death by her beloved husband Lester, her darling mother Mildred (Smtih) Brown, father John Brown, and her step-brother Dale Brown. Margaret’s family would like to thank the wonderful staff at Grand Oaks Nursing Center for their kindness, compassion, skilled care, and pure love they showered her with. We are forever grateful. Private Graveside Services with Honor Guard rites will be held at Evergreen Cemetery in Branch. Those who wish to remember Margaret with a memorial donation are asked to consider the Parkinson’s Foundation.

Margaret Ann Peterson (Brown) was born on May 20, 1934 in Cheyenne, Wyoming. On July 13, 2020 she was reunited in Heaven with her beloved husband of 65 years, Lester. Margie's father worked for the railroad, which allowed them the opportunity... View Obituary & Service Information

The family of Margaret Ann Peterson created this Life Tributes page to make it easy to share your memories.

Send flowers to the Peterson family.