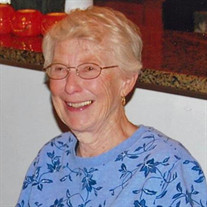 Marilyn L. Raven aged 90 of Ludington, formerly of Scottville, passed away on Saturday December 11, 2021 with her loving husband of 70 years, E. Dean Raven by her side. Marilyn was born on October 18, 1931 in Cadillac, Michigan to Eldon and Helen Peterson and graduated from Tustin High School, which is now Pine River High School. On October 6, 1951, Marilyn married Dean Raven in Cadillac and together they moved to Scottville where Dean began his career with Michigan State Cooperative Extension Service and Marilyn devoted herself to being a mother. When her children were older Marilyn enrolled in the nursing program at West Shore Community College and was a member of the first graduating class of the licensed practical nursing program. Marilyn then went to work for Dr. H. G. Bacon in Scottville and Dr. John and Ruth Carney for many years. Marilyn learned how to sew as a young girl and became an accomplished seamstress as an adult. She served as an instructor for the 4-H sewing classes for many years and also enjoyed playing bridge locally. She and Dean were longtime members of the United Methodist Church in Scottville and Ludington. Upon their retirements, they enjoyed spending their winters in New Port Richey, Florida. Marilyn was an amazing woman and among many other things, her family will remember her as a devoted wife, mother, and grandmother. Marilyn strived to instill the importance of a good work ethic and a frugal lifestyle in her family. Those who knew her - were well acquainted with her belief in the motto, “a penny saved is a penny earned!” Marilyn will be greatly missed by her husband E. Dean Raven; their four children Mark (Taryn) Raven, Marcia Raven of Oregon, Chris (Vicki) Raven of Ludington, and Lori Bachelder of Grand Rapids; her eleven grandchildren Dean, John, Matt, Tracy, Greg, Andrea, Meisha, Parker, Allyse, Carson, and Allison; her eight great-grandchildren Macie, Sadie, Madison, Marie, Ellie, Joanna, Cameron, and Gabriel. Marilyn will also be missed by her sisters Marge, Florence, Carol, and Diane (Doug); her brother Don (Sue); her sister-in-law Ann Hyde; and brother-in-law Ted (Mary) Raven. She was preceded in death by her granddaughter Mikala Raven, and son-in-law Brad Bachelder. A memorial service will be held for Marilyn at a later date. Those wishing to pay tribute can donate to the Dean and Marilyn Raven Scholarship Fund at West Shore Community College.

Marilyn L. Raven aged 90 of Ludington, formerly of Scottville, passed away on Saturday December 11, 2021 with her loving husband of 70 years, E. Dean Raven by her side. Marilyn was born on October 18, 1931 in Cadillac, Michigan to Eldon and... View Obituary & Service Information

The family of Marilyn Louise Raven created this Life Tributes page to make it easy to share your memories.

Send flowers to the Raven family.