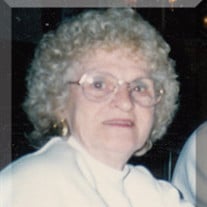 OBITUARY:Mrs. Marilyn M. Schramm, 83, of Scottville, passed away on December 21, 2012. Marilyn was born January 14, 1929 to Crayton & Bird (Whalley) Isley in Shelby. She graduated from Shelby High School in 1947. On January 25 of that year, she married Richard Schramm. Throughout her life, Marilyn worked often as a waitress, serving at several locations in Scottville. At one time, she and her husband operated the Scottville Bakery on South Main Street. When they lived in Sterling Heights, she worked at Hudson’s, retiring in 1985. Marilyn loved caring for her family. When daughter Robin and her husband, Mike, were both serving in the US Navy, Marilyn cared for their children, earning the special recognition of an honorary medal from the Navy for her care and dedication.Marilyn was preceded in death by her parents, her husband, Richard, in 1986, sisters & brothers Dorothy Isley, Crayton Isley, Jr., Russell Theodore Isley, Madeline Strailey, June Arthurhultz, Dorla Andrews, Margie Hansen, Nellie Peterson and Lyle Baird, and son-in-law Rick Chimel.She will be lovingly remembered by her daughters Pamela Chimel of Scottville, Patricia (Russell) Folland of Custer, Peggy Schramm of Ludington, Robin (Michael) Ryan of Grayling, and Linda (Dennis) Wahr of Scottville; her sons Tim (Thresa) Schramm of PInkney and William Schramm of Scottville; 20 grandchildren and 18 great grandchildren; her brother Robert (Delores) Isley and her sisters-in-law Ona Isley and Lottie Isley, all of Shelby.Funeral services will be held for Marilyn at 1:00 pm on Thursday, December 27, 2012 at Stephens Funeral Home of Wyman Funeral & Cremation Services in Scottville with Pastor Craig Nelson, Path of Life Ministries, officiating. Visitation will be held on Thursday from Noon until the time of the service at the funeral home. Interment will take place at Mt. Hope Cemetery in Shelby. Memorial contributions may be made to the Mason County Chapter of United Way.

The family of Marilyn M. Schramm created this Life Tributes page to make it easy to share your memories.

Send flowers to the Schramm family.