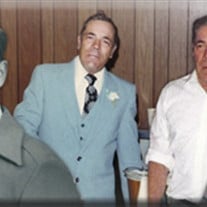 MARSHALL'S LIFE STORY:A no frills sort of man, Marshall Stoevsand lived a contented life full of plenty of fun with his beloved family and friends. He never focused his attention on building wealth, rather, he filled his days making the most... View Obituary & Service Information

The family of Marshall Armen Stoevsand created this Life Tributes page to make it easy to share your memories.

Send flowers to the Stoevsand family.