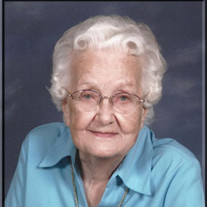 MARTHA'S STORY:The dictionary defines “mom” or “mother” as one who raises a child. Martha Paulsen exemplified this in all aspects of her life. Whether she was raising her own children, caring for the many children who came into her life, or mentoring the many kids who worked for her, Martha made an impact in their lives, helping to set the foundation from which they would in turn build their families.Martha Ann White was born on Wednesday, June 22, 1921 to Jesse and Dona (Sims) White at their home on Crowley Street in Scottville, 30 minutes after her twin sister Mary. Along with their brothers Clair and Jimmy, and sister Bonita, they grew up in the Scottville and later Carr Settlement communities. Their father Jesse was a local barber in town, and during the depression when times were tough, their mother Dona operated the switchboard for the Carr Telephone Company in Branch. From time to time, Martha and Mary would help out on the switchboard. She attended Locke School in the Carr area before graduating from Custer High School with the class of 1939. Martha was always very proud of her beloved Cardinals, and remained in close contact with her classmates through the years. In 1941 she married Harry Paulsen who was from the Sugar Grove area, and together they raised their four children Ellen, Edwin, Bonita, and Mark. Martha had quite a reputation as a cook, and when a businessman who owned a local restaurant needed someone to take over management, he turned to Martha and made it possible for her to purchase the establishment known as “Martha’s Place” on Main Street in downtown Scottville. Martha employed many kids from the area, teaching and mentoring them not only on cooking and waitressing skills, but on life, work ethic, and integrity. She later worked for Torfe Gedraitis at Laundryland, and also served as a home health aide for a while.Martha loved gospel music, and helped organize a community group who brought “The Rebels Quartet”, a southern gospel group, to Scottville to sing during the Harvest Festival. They would sing for the crowd, and then enjoy a great meal at her restaurant before heading home. This began a bond that would last for generations, as their boys followed them with a group known as “The Booth Brothers.” Martha rarely missed their concerts whenever they were in the area.Martha’s home was always an open door. She became an unofficial “Mom” to many; whether it was friends of her kids, foster children, or children of friends and family who needed a place to live, Martha was willing. There were never too many; she always had room for one more in her home or at her table.The foundation of her faith in God started at the former Scottville E.U.B Church which was located on North Main Street in a building now occupied by FiveCAP. She was very active in her church until they merged with the United Methodist denomination, then attended the Scottville Bible Church where her son-in-law Ralph Wheaton was pastor. In later years, Martha became a member of Our Savior Lutheran Church. As a twin, she had a special bond with her sister Mary, and they shared a home together for many years. In the winter, they would travel to Port Charlotte, Florida where they could enjoy one of their favorite pastimes together, watching baseball. Port Charlotte was home to the Texas Rangers during spring training, and Martha and Mary rarely missed a game. They became “house mothers” to several of the young players, relationships that would last for years into their professional careers. Whenever a player was in town, they would be sure to stop and see the girls.Coming from a family of educators, Martha loved to read and recite poetry, and loved reading to children. She had a collection of button hooks, which was started as a tribute to her brother Clair, and a collection of eagles, which she started while living in Port Charlotte.Martha went quietly home to her Savior on Sunday, March 23, 2014 following a courageous fight with cancer. She was preceded in death by her former husband Harry, her parents, her brothers Clair and Jimmy White, her sister Bonita White, her daughter Donna Paulsen (twin of Bonita), her son-in-law John Chisholm, and her daughter-in-law Betty Paulsen.Martha will be lovingly remembered by her children Ellen Chisholm, Edwin (Faith) Paulsen, Bonita Wheaton, and Mark (RaeAnne) Paulsen, her grandchildren Lee (Kim) Paulsen, Michelle (Andrew) Thomas, Nick (Debbie) Wheaton, Darla (Steve) Barnes, Marshall (Missy) Wheaton, Dana (Travis) Leapley, Diana (Rich) Issacs, Matthew Wheaton, Justin Paulsen, Jeffrey Paulsen, David Gregwer, Stacy Gregwer, Craig (Michelle) Holtrust, Cassidy (Jeremy Anderson) Holtrust, and Cody Holtrust, 21 great-grandchildren, 2 great, great-grandchildren, her twin sister Mary Worthington, her sister-in-law Barb White, her cousin Betty Blundell, and numerous nieces and nephews.Funeral services will be held for Martha at 1:00 PM on Monday, March 31 at Our Savior Lutheran Church with her pastor, Rev. James Schroeder officiating. Burial will take place on the family lot in Brookside Cemetery later in the spring. Friends may meet with her family for a time of visitation on Monday from 11:00 AM – 1:00 PM at the church. Those who wish to make memorial contributions are asked to consider Our Savior Lutheran Church, or Hospice of Michigan – Mason County.

MARTHA'S STORY:The dictionary defines &#8220;mom&#8221; or &#8220;mother&#8221; as one who raises a child. Martha Paulsen exemplified this in all aspects of her life. Whether she was raising her own children, caring for the many children who... View Obituary & Service Information

The family of Martha Paulsen created this Life Tributes page to make it easy to share your memories.

Send flowers to the Paulsen family.