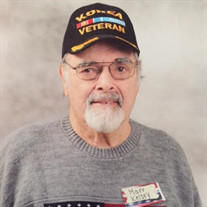 During his inaugural presidential address in 1961, John F. Kennedy spoke the famous words "Ask not what your country can do for you; ask what you can do for your country." Marv Kelsey took these words to heart and they were the foundation on which he built his life. Marvyn Douglas Kelsey was born on July 3, 1935 in Bell Gardens, California, the son of Dr. Max G. and Alice M. (Bowman) Kelsey. He grew up in the Roscommon area and graduated from Gerrish-Higgins High School with the class of 1954. He went on to serve his country with the Unites States Army, stationed in Korea following the Korean Conflict. Following his discharge from service he worked various jobs, including for the Liquor Control Commission, before settling into a position with the Michigan Employment Security Commission in Ludington as a Placement Specialist, a position he held for the next 27 years. Marv took the challenge given by President Kennedy, asking citizens to be active in their communities, to heart. He served with the American Red Cross and was instrumental in the acquisition and outfitting of the disaster vehicle, and served as Fire Chief of the Pere Marquette Twp. Fire Department. He served as president of the Summit PTA, and as president of the Ludington Area Schools Board of Education. During his tenure on the school board, he oversaw the building of the swimming pool, auditorium, libraries, and several other additions which still benefit the community today. As a Life Member of the Scottville Optimist Club, he took the motto “Friend of Youth” very seriously. Marv organized and oversaw the club Teen Dances for over 30 years, helped with bike rodeos and sporting events, worked with the Boy Scouts, served as chairman of the “Let’s Build a Track” committee for Mason County Central schools and was the Booster Club president for several years. When his boys were growing up, Marv served as Cub Scout Master in West Branch, and as chairman of the West Branch Little League. One of his favorite ways to serve his community was entertaining as “Honky the Clown” and as Santa Claus for parades, parties, fairs, at hospitals, nursing homes, and for local schools. Marv enjoyed entertaining, hoping to make people in his community feel good and to brighten their day. Marv found time for himself as well and had a passion for collecting “treasures.” The phrase “one man’s junk is another man’s treasure” were words Marv lived by. He could be considered as one of the original “American Pickers”, always buying and trading collectables, with an eye for motorcycles and coin collecting. This hobby led him to be a member and president of the Gold Wing Motorcycle Club, member of the West Michigan Old Engine Club, the Pere Marquette Antique Car Club, Ducks Unlimited, and the American Numismatic Association. Marv received numerous awards for his service including Optimist of the Year, Exceptional Volunteer with the Red Cross, Citizen of the Year, Kiwanis Club Community Service award, from the Mason County Tourist Association for promoting tourism, and Distinguished member of Ducks Unlimited to name a few. Even with all the service affiliations, awards, and volunteering, Marv found no greater joy than his family. His family was the very reason Marv gave so much of himself, to leave a better community for his family to live. His family is his greatest legacy. Marv will be greatly missed by his wife Arlene, their children Tim Kelsey, Scott (Helen) Kelsey, Rick (Karen) Larson, Gloria (John) Beckman, Jennifer (Matt) McMellen, and Josette (John) Waite; his grandchildren Kaden “Timothy” Kelsey, David Vodvarka, Dylan, Ashley, and Stefanie Kelsey, Matthew Larson, Jason (JoAnn) Larson, Anthony (Amy) Larson, Nathan (Yuka) Larson, Erin (Stacey) Swiatlowski, Kendra Beckman, Trina Cambridge, Alyssa (Usman) Sheikh, Aleece (Colton) Gregory, Alexa McMellen, and David Waite; his great-grandchildren Kadence Vodvarka, Raelyn and Milli Flores, Gabriel Hernandez, Bella Neutzman, Aria Michael, Aleemah and Suleiman Sheikh, Zoe, Jason Jr, Gavyn, Sophia, Alexander, and Matthew Larson, Ara Swiatlowski, Ariana and Zachariah Larson, Lyla and Liam Gregory. A Celebration of Marv’s Life will be held at 11:00 am on Wednesday, June 8 at Wyman Funeral & Cremation Services – Stephens Funeral Home in Scottville. Friends may gather with his family for a time of visitation on Tuesday evening from 6:00 – 9:00 pm, and on Wednesday morning from 10:00 until time of services at the funeral home. Those who wish to remember Marv with a memorial donation are asked to consider the Scottville Optimist Club.

During his inaugural presidential address in 1961, John F. Kennedy spoke the famous words "Ask not what your country can do for you; ask what you can do for your country." Marv Kelsey took these words to heart and they were the foundation on... View Obituary & Service Information

The family of Marv "Honky" Kelsey created this Life Tributes page to make it easy to share your memories.

During his inaugural presidential address in 1961, John F. Kennedy...

Send flowers to the Kelsey family.