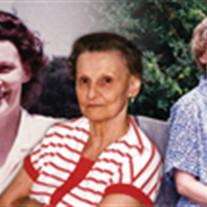 MARY'S LIFE STORY:Known as &#8220;Aunt Mary&#8221; to nearly everyone, Mary Saya was one of those rare women who consider it pure joy to serve others. She truly embraced her faith and gave high regard to the calling to be the hands and feet... View Obituary & Service Information

The family of Mary Agnes Saya created this Life Tributes page to make it easy to share your memories.

MARY&#39;S LIFE STORY:Known as “Aunt Mary” to nearly everyone, Mary...

Send flowers to the Saya family.