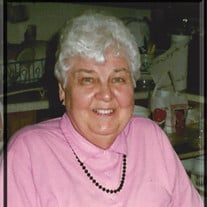 Mary Gertrude Shoup, aged 76 of Custer passed away unexpectedly at Noon on Friday, May 16, 2014 at her rural Custer home. Mary was born on September 23, 1937, the fourth of eight children to William and Louisa (VorderLandwehr) Shoup at their home near Custer.Though afflicted with polio at a young age, it did not prevent her from a life-long interest in education and music. Mary was educated at Ludington St. Simon, Weldon Creek, and Walhalla, and Custer Elementary schools, and graduated from Scottville High School with the class of 1957. She then graduated from Aquinas College in Grand Rapids with a Bachelors of Arts degree in Elementary Education. Her entire career of 35 years was teaching elementary students at Mason County Eastern School in Custer.Mary was a member of the Shoup Family Singers, a popular acapella singing family of the 1940’s, 50’s and early 60’s in throughout west Michigan. They had a weekly radio show and were on numerous television shows and regular entertainers at area gatherings. While singing together, they were guests on National TV from New York City, National Radio from Chicago, and performed concerts in mid-western cities. Mary played the flute for the Grand Rapids Symphonette in the late 1950’s as well. In her early teaching career, she was accompanist and co-director with her sister Margaret for the Mason County Eastern Choir. She accompanied students for Solo & Ensemble contests for over 30 years. In addition, she served 40 years as organist of St. Mary’s Catholic Church in Custer.Following her retirement from teaching, Mary continued living on the family home and farm east of Custer, spending much of her time entertaining or visiting her numerous relatives and friends. She was preceded in death by her parents William and Louisa Shoup, her sisters Floretta and Paulina Florine, and her brothers-in-law Hermann Bialek and John Smedley.Mary will be greatly missed by her close and special friend James Allison of Custer, three brothers William Shoup and his wife Sherry of North Muskegon, James Shoup and his wife Donna of Custer, and Daniel Shoup and his wife Janet of Traverse City, her two sisters Margaret Smedley of Traverse City, and Bernadette Lykins of Lakeview, and many nieces, nephews, great nieces and nephews, and several great, great nieces and nephews.The Mass of Christian Burial will be celebrated at 11:00 am on Friday, May 23 at St. Mary’s Catholic Church with Rev. Anton Tran as celebrant. Burial will follow at St. Mary’s Cemetery. Friends may meet with her family for a time of visitation on Thursday evening from 5:00 – 8:00 pm at the Stephens Funeral Home in Scottville, and on Friday morning from 10:00 – 11:00 am at the church. The Rosary will be prayed for Mary at 7:00 pm on Thursday evening at the funeral home. Those who wish to make memorial contributions are asked to consider the Shoup Family Music Award fund, the Mason County 4-H, or to a charity of the donor’s choice.

Mary Gertrude Shoup, aged 76 of Custer passed away unexpectedly at Noon on Friday, May 16, 2014 at her rural Custer home. Mary was born on September 23, 1937, the fourth of eight children to William and Louisa (VorderLandwehr) Shoup at their... View Obituary & Service Information

The family of Mary Gertrude Shoup created this Life Tributes page to make it easy to share your memories.

Send flowers to the Shoup family.