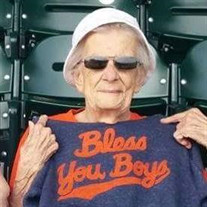 Mary K. Worthington, aged 93 of Ludington formerly of Scottville, passed away peacefully on Tuesday, February 17, 2015 at Mercy Health Partners in Muskegon. Mary was born on June 22, 1921 to Jesse and Dona (Sims) White, and graduated from Custer High School with the class of 1939. Mary worked a variety of jobs over the years including Star Watch Case, in the laundry at Memorial Medical Center in Ludington, for her twin sister Martha at her restaurant in Scottville, and in the Lawn & Garden area at Wal-Mart, retiring only recently when her health would no longer allow her to continue. Mary and Martha shared a home together for many years in Scottville and wintered in Port Charlotte, Florida. Mary loved baseball and together with Martha, regularly attended games of the Texas Rangers and Tampa Bay Rays at their spring training facilities. They made long lasting friendships with many of the players including Nolan Ryan, Ivan “Pudge” Rodriguez, and Craig Monroe. When home in Michigan, Mary was a loyal Tiger fan and tried to make a game or two every season, especially if they were playing the Rangers or Rays. Mary was preceded in death by her parents, her twin sister Martha in 2014, her brothers Clare and Jimmy White, her sister Bonita White, and her great-grandson Aaron Claveau. She will be greatly missed by her daughter Marlene and Mark Claveau of Scottville, her grandsons Dan (Brenda) Claveau of Scottville, Jeffrey Claveau (friend Val McKinnon) of Custer, Jason Claveau and Shawn Claveau both of Las Vegas, NV, 10 great-grandchildren, her cousin Betty Blundell, many nieces, nephews, and great friends. No services will be held for Mary at this time. A Graveside service will be held in the spring at Brookside Cemetery in Scottville, with Rev. James Schroeder officiating. Those who wish to make contributions in Mary’s memory are asked to consider a charity of their own choice.

Mary K. Worthington, aged 93 of Ludington formerly of Scottville, passed away peacefully on Tuesday, February 17, 2015 at Mercy Health Partners in Muskegon. Mary was born on June 22, 1921 to Jesse and Dona (Sims) White, and graduated from Custer... View Obituary & Service Information

The family of Mary K. Worthington created this Life Tributes page to make it easy to share your memories.

Send flowers to the Worthington family.