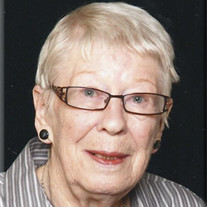 MAY'S OBITUARY:May C. Snow, aged 90 of Yuma, Arizona, former resident of Ludington, passed away on Saturday, January 18, 2014. May was born on May 5, 1923 in Boise, ID, the daughter of John and Cecelia (Jensen) Knudsen, and moved to Scottville with her family where she grew up and graduated from Scottville High School with the class of 1942. On February 19, 1949, she married Clarence “Barney” Clapper, and he preceded her in death on 1963. May then married Harry Snow on July 10, 1965, and he also preceded her in death in 2005.May adored her family, always wanting to spend time with her grandchildren watching them grow up and supporting them as much as possible. She enjoyed bowling, shuffleboard, playing pool and cards, and in her later years loved listening to the VFW band. May was an excellent baker and was well known for her pies, which she often shared at many American Legion functions. She was a member of St. John’s Lutheran Church in Ludington, and the American Legion Post 76 Auxiliary in Ludington. She recently moved to Yuma to stay with her daughter Kathy.Along with her husbands, May was preceded in death by her parents, her son-in-law Bob Rummer, her sisters Hilda Mortensen, and Helen Knudsen, her brothers Johnny, Harry, and Hank Knudsen.May will be lovingly remembered by her daughters Karen Rummer of Custer, Kathy (Bryan) Wilson of Yuma, AZ, and Susan (Marty) Dukes of Hart, her lifelong dear friend of 70 years, Edily Bogner of Ludington, her grandchildren Jim (Haley) Rummer of Harbor Springs, Chad (Brandi) Rummer of Custer, Bruce (Diane) Biegalle of California, Brandon (Gina) Wilson of Yuma, AZ, Jason Pickard, and Tavan Pickard both of Hart, her great-grandchildren Bryleigh Rummer of Harbor Springs, Cayden and Colby Rummer of Custer, her brother Andy (Marge) Knudsen of Florida, and many nieces and nephews.A Celebration of May’s Life will be held at 11:00 am on Saturday, May 10, 2014 at St. John’s Lutheran Church in Ludington, with Rev. Thomas Boehne officiating. Those who wish to make memorial contributions in honor of May are asked to consider Lakeshore Animal Friends, or a charity that supports the care of animals.

MAY'S OBITUARY:May C. Snow, aged 90 of Yuma, Arizona, former resident of Ludington, passed away on Saturday, January 18, 2014. May was born on May 5, 1923 in Boise, ID, the daughter of John and Cecelia (Jensen) Knudsen, and moved to Scottville... View Obituary & Service Information

The family of May C. Snow created this Life Tributes page to make it easy to share your memories.

Send flowers to the Snow family.