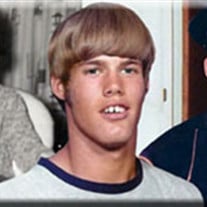 If you asked Melvin Paul Holbrook III who he was, he would have responded “A Michigan State Trooper.” His dedication to his job was of the highest priority to him and he was driven to excellence in his career. Paul was much more than a trooper; he was a son, brother, and father who possessed a diverse palette of interests through which he brought light and life to all those within his reach. Paul was a man of faith who used his gift of music to minister to his church family and bring peace to his soul.The 1950s were an unprecedented period of time in American history as it was during this decade that racial segregation was declared unconstitutional in public schools by the Supreme Court, the vaccine for polio was discovered, and the world was introduced to the sounds of rock ‘n roll. It was also during this time that Melvin and Maureen (Doran) Holbrook, Jr., of Ionia, Michigan, were pleased to announce the birth of their first child, their son Melvin Paul, on February 7, 1956. Melvin, who was usually known as Paul, was later joined by four younger siblings: Matthew, Maurice “Maurie,” Mark, and Meleen. From an early age he fostered close relationships with his siblings that would follow him throughout his entire lifetime. Paul’s father supported his family through his work for Jackson Vibrator, a manufacturer of railway equipment that is now known as Harsco Track. His mother was a homemaker who cared for her children and kept their busy family schedule intact.There were a few interests that Paul developed during his formative years that were an integral part of his life as an adult. He loved sports and was a talented and intense opponent during his high school years at Greenville High School. Paul was an All-State fullback in football, played basketball, and was an All-State quarter miler and sprinter on the track team. Paul also had a passion for cars and rebuilt a Barracuda into a street rod. He was passionate about this car as evidenced by his immersion of both time and money. His car was fast, it was loud, it was cool, and most importantly, it was all his! His brothers can still recall the car’s specs – “440cc V8 with a massive carburetor and a tricked-out rear end!”After graduating from high school in 1974, Paul continued his education at Albion College where he played football for two years. It was also during his time as a student at Albion that he married his high school sweetheart. The young couple soon welcomed two children, Paul IV and Sabrina. Paul graduated from Albion with his Bachelor of Arts Degree in Accounting in 1978, and began working as an accountant for a tool & die company in Grand Rapids, where he worked for seven years. Paul discovered that this is not where his heart truly was, and he braced himself for a career change. He applied for acceptance into the prestigious Michigan State Police School and he worked hard to gain admittance. He proudly graduated from recruit school on April 6, 1986.Paul’s career path then led him to work for the Michigan State Police from a few different posts throughout Michigan including Coldwater, Ionia, Manistee, and for the past ten years, from Traverse City. It was after he became a trooper that Paul remarried and welcomed daughter Alana into his heart.There were so many things that made Paul unique. He enjoyed spending time outdoors hunting and fishing, and he continued to play a variety of sports including softball. To Paul, physical conditioning was more than just a job requirement, it was a lifestyle. He fostered a spirit of generosity, volunteering his time for the Benzie Central High School track team where he worked with shot put and discus throwers. He had attended Resurrection Life Church in Traverse City, and had recently gotten involved in a Bible study at Northpointe Community Church where he also served as a member of the worship team, playing his guitar. It was his faith that helped sustain him when he grieved the death of his father just one year ago. Paul loved music and gained much peace and fulfillment through music over the years. He was a very structured and disciplined individual who always saw things in black and white. Paul was a bit of a perfectionist and thrived on order and structure in his life.Melvin Paul Holbrook III was a hard working man who was a community servant through and through. He was dedicated to whatever he put his mind to and could always seem to accomplish whatever goal he set forth for himself. Paul was athletic and musically inclined as well, and with his sacrificial nature combined with the love for the people in the communities he served, he impacted lives far too numerous to count. Paul will be remembered by his mother Maureen Holbrook of Miami, Oklahoma, his children Paul Holbrook IV of Nashville, Tennessee, Sabrina Wallington of Toledo, Ohio, and Alana Holbrook of Beulah; his grandson Cameron Reuther; his brothers and sister Matthew (Sheri) Holbrook of Milwaukee, Wisconsin, Maurice (Maria) Holbrook of Ludington, Mark (Christine) Holbrook of Springfield, Missouri, and Meleen (John) Froman of Miami, Oklahoma; his Aunt Kathleen Holbrook of Petoskey; his Uncle Ron (Dorothy) Doran of Dallas, Texas; and many nieces and nephews. Funeral services with State Police Honor Guard will be held at 10:30 AM on Saturday, August 15 at the auditorium of Benzie Central High School, with his pastor Rev. Ted Mulder, and Capt. Steve Eccles, MSP Chaplain officiating. Burial will follow at Oakwood Cemetery in Traverse City.

If you asked Melvin Paul Holbrook III who he was, he would have responded &#8220;A Michigan State Trooper.&#8221; His dedication to his job was of the highest priority to him and he was driven to excellence in his career. Paul was much more... View Obituary & Service Information

The family of Melvin Paul Holbrook created this Life Tributes page to make it easy to share your memories.

If you asked Melvin Paul Holbrook III who he was, he would have...

Send flowers to the Holbrook family.