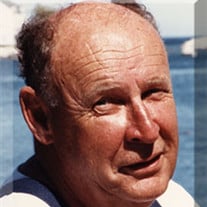 OBITUARY:Merlin K. Reeds, aged 81 of Scottville passed away on Wednesday, August 24, 2011 at the Grand Rapids Home for Veterans. Merlin was born on April 18, 1930 in Grand Rapids, the son of Oliver and Elizabeth (Greene) Reeds. He graduated from Scottville High School with the class of 1947, and served his country with the United States Air Force during the Korean Conflict. Following his return from service, Merlin married Ruth Hoover they have celebrated 65 wonderful years together. He earned his Bachelor’s Degree in Accounting and Computer Technology from Michigan State University, and his Masters Degree from Eastern Michigan University. Merlin was a Class of ’47 member of the Scottville Clown Band, where he was known as “Tootsie” while playing the trombone. He and Ruth lived on their farm north of Scottville, where they operated Amber Acres Tax Accounting Service for over 20 years. This location also became known as the “Clown Band Transportation Department” during the summer months. Among all his accomplishments and hobbies, he often referred to himself as an “avid hunter and lousy fisherman.” Merlin was preceded in death by his parents Oliver and Elizabeth Reeds, his brother Roger, and his sister Joanne Smith. He will be greatly missed by his beloved wife Ruth, his children Pamela (Carl) Petersen of Waterford, Michael (Christine) Reeds of New Hudson, and Mark (Ruth) Reeds of Big Rapids, his former daughter-in-law Janet Reeds of Wixom, 9 grandchildren, 9 great-grandchildren, his brother Dr. Thomas (Nikki) Reeds of Coeur d’ Alene, Idaho, and several nieces and nephews. Funeral services will be held for Merlin at Noon on Monday, August 29 at the Stephens Funeral Home in Scottville, with Pastor Dave Wood of the Sugar Ridge Church of the Brethren officiating. Burial will take place at Brookside Cemetery. Friends may meet with his family for a time of visitation on Sunday evening from 7:00 – 9:00 PM at the funeral home. Those who to make memorial contributions are asked to consider the Scottville Clown Band Scholarship Fund.

OBITUARY:Merlin K. Reeds, aged 81 of Scottville passed away on Wednesday, August 24, 2011 at the Grand Rapids Home for Veterans. Merlin was born on April 18, 1930 in Grand Rapids, the son of Oliver and Elizabeth (Greene) Reeds. He graduated... View Obituary & Service Information

The family of Merlin Keith Reeds created this Life Tributes page to make it easy to share your memories.

OBITUARY:Merlin K. Reeds, aged 81 of Scottville passed away on...

Send flowers to the Reeds family.