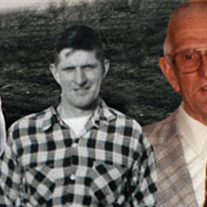 With his charming personality and sunny disposition, Merrill Bates was a man who made a significant impact on everyone within his reach. He was a trickster who liked to tease, and a man with a routine that he rarely deviated from. Merrill was... View Obituary & Service Information

The family of Merrill Harrison Bates created this Life Tributes page to make it easy to share your memories.

With his charming personality and sunny disposition, Merrill...

Send flowers to the Bates family.