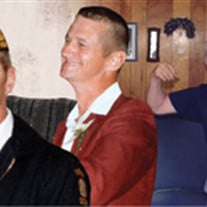 Merwin Bacon dedicated his life to his family. He worked hard to provide for his children, and he found the reward for all his effort in the warmth of their company.With the crash of the stock market in 1929, a decade of prosperity and industrial... View Obituary & Service Information

The family of Merwin Bacon created this Life Tributes page to make it easy to share your memories.

Merwin Bacon dedicated his life to his family. He worked hard...

Send flowers to the Bacon family.