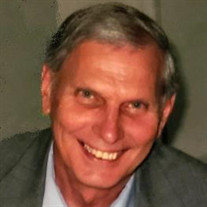 Michael Alan Grajewski aged 69 of Branch passed away at his home in the presence of his family. Mike was born on June 1, 1951 in Detroit, the son of Raymond and Irene (Setera) Grajewski and graduated from Harper Woods Notre Dame Catholic High School with the class of 1969. Mike served his country with the United States Army during the Vietnam Conflict. Following his discharge, he returned home and began a career with AT&T as a Lineman, Installer, and eventually as a Fiber Optic Splicer, retiring in 2006 after 32 years. On September 10, 1975, Mike married Diane Dipace at St. Peter’s Catholic Church in Mt. Clemens and have celebrated 45 years by each other’s side. Following retirement, Mike and Diane moved to Branch where Mike was able to fully enjoy his many outdoor activities which included hunting, fishing, rock collecting, and hunting for Morel mushrooms. As a Vietnam Veteran, Mike was a member of the Custer Gold Bar VFW Post 5096, the American Legion Post 76 in Ludington, and was a proud supporter of the NRA. Thanks to local veteran’s organizations, Mike was able to continue his love of being outdoors through his disabilities by participating in Tight Lines for Troops. Mike was preceded in death by his parents. He will be greatly missed by his wife Diane; his children Eric (Juretta) Grajewski of Farmington Hills, Matt (Sarah) Grajewski of Grand Rapids, Mark (Sarah) Grajewski of Caledonia, and Lisa Grajewski (John Weidner) of Port Huron; his grandchildren Amara, Elizabeth, Miles, Sophie, Lucas, Claire, and Oliver; his brother Larry (Cheryl) Grajewski of Ann Arbor; his sisters Mary Lynn (Mike) Burns of Vero Beach, FL, and Ann Marie (Mike) Marsh of Canton; along with several nieces, nephews, cousins, and many great friends. The Celebration of Mass will be held for Mike at 11:00 am on Friday, October 2 at St. Mary’s Catholic Church in Custer with Rev. Daniel DePew as Celebrant. Friends may gather with Mike’s family on Friday morning from 10:00 am until time of Mass at the church. Attendee’s are asked to please wear a mask inside the church and follow social distancing protocols. Those who wish to remember Mike with a memorial donation are asked to consider Disabled American Veterans (DAV) who were so instrumental in assisting him with receiving the care he needed from Agent Orange exposure during his service in Vietnam.

Michael Alan Grajewski aged 69 of Branch passed away at his home in the presence of his family. Mike was born on June 1, 1951 in Detroit, the son of Raymond and Irene (Setera) Grajewski and graduated from Harper Woods Notre Dame Catholic High... View Obituary & Service Information

The family of Michael Alan Grajewski created this Life Tributes page to make it easy to share your memories.

Michael Alan Grajewski aged 69 of Branch passed away at his home...

Send flowers to the Grajewski family.