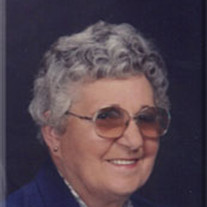 OBITUARY:Mrs. Mildred “Millie” Bayle, age 91 of Scottville, passed away on Wednesday, December 15, 2010 at Memorial Medical Center in Ludington. Millie was born on January 27, 1919 in Saugatuck to Grove O. and Estella Mae (Augustine) Taylor, and graduated from Walkerville High School with the class of 1938. On December 30, 1939, she married Byron Bayle in Hesperia, and they celebrated 62 years by each other’s side until Byron preceded her in death on April 21, 2002. Millie was also preceded in death by her parents; her son Howard on February 2, 1984; her son-in-law William Hartley on April 4, 2010; her grandsons Cory Hartley on January 12, 1988, and Sam Bayle on August 8, 1989; her brothers Claude, Lyle, and Robert Taylor; and her sisters Orpha Kirwin, and Ruth Ives. Millie worked at Gibbs Goody’s in Ludington, and CW Smith & Son auto dealership in Scottville, was a member of the Scottville United Methodist Church, and the Custer Gold Bar VFW Post 5096 Ladies Auxiliary. She served as Chapter Mother for the FHA, President of the Mason County Central Band Boosters for 4 years, and as President and Secretary of the Scottville Bowling Association for several years. For their many volunteer efforts, Millie and Byron were honored at Scottville Citizen’s of the Year in 1991. She loved working in her yard and flower garden, but her greatest love was reserved for her grandchildren. Millie will be lovingly remembered by her daughter Connie Hartley and her daughter-in-law Sue Bayle both of Scottville; her beloved grandchildren Tom (Deb) Bayle of Scottville, Stacy (Adrian) Martinez of Albuquerque, NM, Keith (Diane) Hartley of Scottville, Melinda (Sean) Sutcliffe of Walhalla, and Melanie (John) Sayles of Pentwater; her precious great-grandchildren Same and Becca Bayle, Aidan and Austin Martinez, Sarah Hartley, Cameryn Sutcliffe, Mercedes, Marissa, and Mandy Sayles; her brothers and sisters Marjorie Cole of Hersey, Florence Fuller of Ruby Creek, Genevieve Hendrixon of Rothbury, Marvin (Patricia) Taylor of Scottville, Bessie Stolcenberg and Edna “Chic” Payne both of Ludington; her sisters-in-law Grace Bayle of Muskegon, Joyce Bayle of Shelby, and Ella Mae Taylor of Scottville; and numerous nieces and nephews. Funeral services will be held for Millie at 3:00 PM on Saturday, December 18 at the Scottville United Methodist Church with her pastor, Rev. Jack Conklin officiating. Burial will take place at Brookside Cemetery in the spring. Friends may meet with her family for a time of visitation on Friday evening from 7 to 9 pm at Stephens Funeral Home in Scottville, and on Saturday from 2 pm until the time of the service at the Church. Those who wish to make memorial contributions are asked to consider the Custer Gold Bar VFW Post 5096, or the Scottville United Methodist Church.

The family of Mildred Mai Bayle created this Life Tributes page to make it easy to share your memories.

Send flowers to the Bayle family.