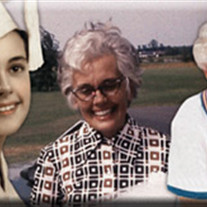 Like a vibrant rainbow painted across the sky, Mildred Strasser brought loving color to the everyday melodies of life. She was a talented pianist who used her creative gifts to inspire the many students who graced her classroom, shaping future... View Obituary & Service Information

The family of Mildred Strasser created this Life Tributes page to make it easy to share your memories.

Like a vibrant rainbow painted across the sky, Mildred Strasser...

Send flowers to the Strasser family.