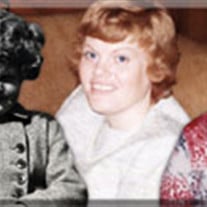 MOLLY'S LIFE STORY:Known for her generous heart, Molly Gedraitis made a significant impact in the lives of many around her. With unwavering faith as her constant companion, she provided a living example of what it means to be the hands and feet... View Obituary & Service Information

The family of Molly Ann Gedraitis created this Life Tributes page to make it easy to share your memories.

Send flowers to the Gedraitis family.