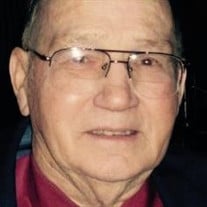 Myrton J. Hackert died peacefully on the morning of April 19, 2016 in Ludington after a battle with cancer. Myrton was born September 6, 1932 in Milwaukee, Wisconsin to Merton and Elsie Hackert. After the family moved to the Scottville area, Mert joined the Marine Corps and proudly served his country from 1952 to 1955 overseas in the Korean War. During that time, he was awarded several medals for his service and bravery including two Bronze Stars, The Marine Corps Good Conduct Medal, National Defense Service Medal, Korean Service Medal, United Nations Service Medal, Korean Defense Service Medal, Combat Action Ribbon, Republic of Korea War Service Medal, and Republic of Korea Presidential Unit Citation. Throughout his entire life he was very proud of his time spent in the Marine Corp and enjoyed discussing his patriotism and time in the service. After leaving the service he met the love of his life Arlene Schmuldt and they were married on November 19, 1955. Mert and Arlene spent 60 wonderful years by each other’s side living life to the fullest and enjoying each other’s company Mert was the definition of proud when it came to his family, work, and life. Mert and Arlene had one son, Alan, which he was very proud of. He spent many years as a bricklayer/mason working hard to provide for his family. He took great pride in his work whether he was pouring a sidewalk or building their beautiful home overlooking Hackert Lake. He was one of the first men hired onto the Consumers Energy pump storage project in 1969. After retiring from the Bricklayers and Allied Craftsmen Union, which he was a member of for 60 years, he enjoyed spending his days farming his homestead with his son Alan. When the work was done on his favorite John Deere tractor, Mert enjoyed nothing more than just spending time with his wife Arlene, whether it was watching a Detroit Tigers game or heading out to try his luck at a video poker machine it didn’t matter as long as Arlene was by his side. Myrton is preceded in death by his parents, sister Geraldine Makowsky and brother-in-laws John Wagner and William Makowsky. Survived by his wife Arlene, son Alan (Janet) Hackert, sisters Gloria Wagner of Ludington, Shirley (William) Cox of Scottville, Carolyn (Robert) Hoffdal of Scottville, Janice (Jerome) Sheridan of Gladwin, MI, and brother David (Linda) Hackert of Scottville. Grandchildren Susan (Stuart) Toth of Mishawaka, IL and Bradley Hackert of Ludington. There will be a small graveside ceremony for family followed by a celebration of life luncheon at the American Legion Post 76 in Ludington at 1 pm on Friday April 22nd, 2016. Everyone is invited to come share their memories of Mert with friends and family. Mert would have loved it if everyone could come and enjoy time together. In lieu of flowers, the family is requesting memorial contributions to Fish on For Freedom, a nonprofit organization started by Mert’s grandson Bradley. Fish on for Freedom is an annual event that provides a day of fishing for the men and women who have proudly served our country.

Myrton J. Hackert died peacefully on the morning of April 19, 2016 in Ludington after a battle with cancer. Myrton was born September 6, 1932 in Milwaukee, Wisconsin to Merton and Elsie Hackert. After the family moved to the Scottville area,... View Obituary & Service Information

The family of Myrton Hackert created this Life Tributes page to make it easy to share your memories.

Myrton J. Hackert died peacefully on the morning of April 19,...

Send flowers to the Hackert family.