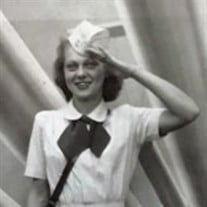 Marcella (Phyllis) Knysz aged 97 of Irons passed away on August 5, 2020 at Medilodge of Ludington. Phyllis was born January 10, 1923 in Chicago, the daughter of John and Magdeline (Alisauskis) Gronskis and was very proud of her Lithuanian heritage. After graduating from an all- girl’s school, Phyllis joined the United States Navy where she worked as a Nurse during WWII. After leaving the military, Phyllis met her soul mate Peter Knysz in Chicago where they married and raised two their two sons John and Peter. Phyllis owned and operated four beauty salons over the course of thirty years before retiring to Florida, later moving to the family farm in Irons. Phyllis will be greatly missed by her son John Knysz; daughter-in-law Tammie-Lynne; grandchildren Dawn Curatlo, Peter (Marcy) Knysz, Rebecca (Todd) Kraus, Bonnie Knysz and Sarah Knysz; her great-grandchildren Savannah, Alexis, Alyssa, Aiden, Ashton, Jordan, Rena, Alexis, Mercedes, Jayden and Onyx; and her great-great-grandchildren Annabelle and Christopher III; along with several cousins and other relatives in both Michigan and Illinois. Phyllis was met at heaven’s gate by her husband Pete, son Peter, grandsons Matthew, John William and Eric. She will be dearly missed and always remembered for her kind heart. The Mass of Christian Burial will be celebrated for Phyllis at 11:00 am on Saturday, August 15 at St. Bernard Catholic Church in Irons with burial to follow at Lakeview Cemetery near her home. Friends may gather with her family on Saturday morning starting at 10:00 am outside the church. Limited numbers will be allowed into the church to pay their respects to Phyllis and her family, then return outside until time of services where social distancing protocols will be followed at all times. Those who are able are asked to please wear a face covering while inside the church. Those who wish to remember Phyllis with a memorial donation are asked to consider St. Bernard Catholic Church.

Marcella (Phyllis) Knysz aged 97 of Irons passed away on August 5, 2020 at Medilodge of Ludington. Phyllis was born January 10, 1923 in Chicago, the daughter of John and Magdeline (Alisauskis) Gronskis and was very proud of her Lithuanian... View Obituary & Service Information

The family of Phyllis Knysz created this Life Tributes page to make it easy to share your memories.

Marcella (Phyllis) Knysz aged 97 of Irons passed away on August...

Send flowers to the Knysz family.