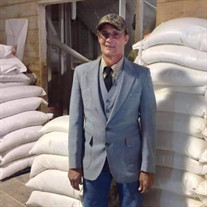 Randall Robert Beard aged 67 of Pickford passed away on Tuesday, November 24, 2020. Randy was born on September 25, 1953 in Ludington, the son of Robert W. and Mildred K. (Wegren) Beard and grew up south of Scottville near Pentwater. Randy graduated from Mason County Central High School with the class of 1971 and earned his Associates Degree from West Shore Community College. After attending Michigan State University, he earned his Bachelor Degree from Ferris State University. On August 5, 1989 he married Tamyra A. Abel in Sault Ste. Marie and they celebrated nearly 30 years together before Tamyra preceded him in death on April 27, 2018. Randy was also preceded in death by his father Robert. Randy and Tamyra lived in Pickford where they raised their children Tara, Matthew, and Stacey. Randy owned and operated the Pickford Elevator for many years before switching gears to work with the State of Michigan at the Newberry and Kinross Correctional Facilities. With his background in farming, Randy oversaw the agricultural area at the facilities. With his career always based around agriculture, Randy was able to show his passion with ease and work with something he truly loved. He also loved to spend as much time as possible fishing and one could often find him working on anything involving mechanics. Randy also loved writing and spent countless hours at his computer writing opinion pieces for local newspapers and outdoor enthusiast magazines. He was a hard worker but looked for ways to help others and make a difference no matter how small. Compassionate and naturally giving, he was very generous with his time and resources. Randy will be greatly missed by his children Tara, Matthew, and Stacey Beard all of Pickford; his granddaughter Annalyn Arbic; his mother Mildred Beard of Pentwater; his brother and best friend Steve Beard of Pentwater and his sister Joni Petersen of Ludington; his niece Sierra Petersen of Chicago, and his nephew George Petersen of Ludington. Private family graveside services will be held at Pentwater Cemetery at a later date. No other services are planned at this time. Those who would like to remember Randy with a memorial donation are asked to consider a local charity that will benefit others during this season.

Randall Robert Beard aged 67 of Pickford passed away on Tuesday, November 24, 2020. Randy was born on September 25, 1953 in Ludington, the son of Robert W. and Mildred K. (Wegren) Beard and grew up south of Scottville near Pentwater. Randy... View Obituary & Service Information

The family of Randall R. Beard created this Life Tributes page to make it easy to share your memories.

Randall Robert Beard aged 67 of Pickford passed away on Tuesday,...

Send flowers to the Beard family.