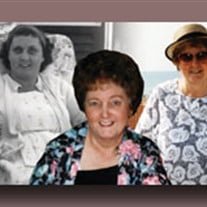 Renetta Tatarchuk was a kind and accepting woman who was always content with what she had. She could find joy in the simplest of things like taking a walk with her dear friend, tenderly preparing a meal for her family, or relaxing while her... View Obituary & Service Information

The family of Renetta Belle Tatarchuk created this Life Tributes page to make it easy to share your memories.

Renetta Tatarchuk was a kind and accepting woman who was always...

Send flowers to the Tatarchuk family.