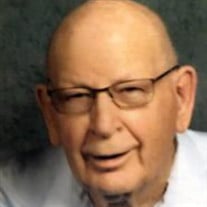 Richard C. &#8220;Dick&#8221; Weaver aged 92 of Scottville passed away on October 16, 2020. He will be greatly missed by his wife of 67 years Marie, his daughter Melanie (Kevin), and his grandsons Nicholas (Kelli) and Nathaniel. He was preceded... View Obituary & Service Information

The family of Richard "Dick" Weaver created this Life Tributes page to make it easy to share your memories.

Richard C. “Dick” Weaver aged 92 of Scottville passed away on...

Send flowers to the Weaver family.