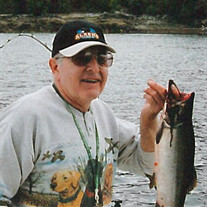 Richard Lee Hays passed away on August 28, 2018, after a long and courageous battle with Parkinson’s disease and Heart failure. His wife, Susan was by his side when he slipped away. Richard and Susan just celebrated their 46th wedding anniversary on August 5th. Richard loved his farm in Fountain. Together with Susan’s parents, Dalton and Elsbeth Holt, they established the Springdale Morgan Horse Farm. Rich trained, rode, drove and cherished his years working with their Registered Morgan Horses. Rich was very involved in Mason County too. He was a 4-H leader for 35 years, served on the Western Michigan Fair Association Board of Directors for 8 years and was a founding member of the Mason County Mounted Division. Rich often remarked that, “He didn’t need to travel or go on vacation because he lived in the best place on earth”. Rich was an avid hunter and fisherman. He has shared wonderful stories of hunting Mule Deer out west, the many big bucks in Michigan and Ohio and the huge moose from Canada. His children and grandchildren hang their Christmas stockings from the moose horns year after year. He loved being outdoors working on the farm, hunting, fishing or just enjoying the beauty of nature. He cherished the memories of teaching his children and grandchildren the skills of hunting and fishing and the love of nature. Rich was born in Fremont, Michigan on April 12, 1943, the son of William and Virginia (Bumpus) Hays. He graduated from Fremont high School in 1961 and went on to Ferris State University to further his education and became a Registered Land Surveyor. In 1968 he was drafted and spent a year surveying for the Army in Vietnam. He was very proud of his service to his country. After his years in the Army, Rich returned to Fremont. He was introduced to Susan by his brother’s girl friend and as they say, “the rest is history”. 10 months later, Richard married Susan E. Holt on August 5, 1972 in Coloma. They lived in Fremont for 2 years before relocating to Fountain. 3 years later, they bought their farm and established Springdale Morgans and the Registered HA-HO Morgan Horses. Richard worked for 30 years as a Registered Land Surveyor in Mason County. He had his own business with surveyor Sam Barnett, and then retired from Norlund and Associates in 2006. Richard leaves behind his wife Susan; his daughter Sheri (John Paul) Howe of Custer, his son Michael (Amanda) Hays of Fountain; the true joy of his life - his fabulous grandchildren Abby and Brody Hays, Lydia, Hillary, and Zachary Howe. They never failed to bring a loving warm smile to Rich’s face. Also mourning his loss are his sisters Carol (Robert) Gerbel of St. Joseph, Sandy (William) DeBruyn of Grand Rapids, Susan (Russ) Surbrook of Fairfield Glade, TN; his brother Larry (Marci) Hays of Canton, OH; his sisters-in-law Sally Reed, Shelly (George) Bray, and Calista (David) Swanson all of Ludington; and his lifelong and dearest friend Ron (Debbie) Lunney of Lake Orion. Rich has been welcomed into heaven by his parents William and Virginia Hays, brother Eddie Bill Hays, sister Lorna Montgomery, his daughter-in-law Samantha Jo Hays, Grandparents, Aunts and Uncles, and his in-laws Dalton and Elsbeth Holt. Rich was a remarkable, caring, loving, giving man who will be missed by all who had the privilege to know and love him. A Celebration of Richard’s Life will be held on Friday, September 7th, 6:00 pm at Our Savior Lutheran Church in Scottville with Rev. James Schroeder officiating. Friends may meet with his family on Thursday evening from 6:00 – 8:00 pm, and on Friday afternoon from 4:00 - 6:00 pm at the church. Those who wish to remember Rich with a memorial donation are asked to consider the West Michigan Fair Association or the Mason County Eastern Equestrian Team.

Richard Lee Hays passed away on August 28, 2018, after a long and courageous battle with Parkinson&#8217;s disease and Heart failure. His wife, Susan was by his side when he slipped away. Richard and Susan just celebrated their 46th wedding... View Obituary & Service Information

The family of Richard L. Hays created this Life Tributes page to make it easy to share your memories.

Send flowers to the Hays family.