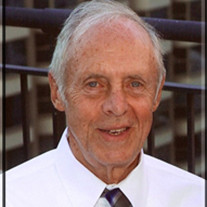 Richard Allen Shanks was a husband, father, son, grandfather, great grandfather and friend to many who experienced his deep kindness, strong work ethic, and lifelong sense of adventure.Richard was born in the Chicago suburb of Cicero in 1936 in a time of great change in America, including wars, industrial growth, development of a solid middle class, and advancements in computers and communications. The security of family, friendships and long-lasting ties to Mason County were important to Richard and provided a solid foundation in his many travels. When he was young, his parents, Alexander Sienkiewicz Shanks and Stephanie Josephine (Racynski) Shanks moved from Chicago to San Diego where his father sought employment in the boat yards during WWII. In 1946, Richard’s parents moved to a farm in Round Lake, where Richard spent his formative years. He often shared fond stories of those years about Johnnie’s, the Dodsons, the Morses, the John Shanks family and summer visits from Chicago cousins.Richard began his own family when he met and fell in love with Jeanette Stark of Fountain. They married on July 8, 1961 and enjoyed nearly 53 years of a life filled with laughter, adventure and commitment. Soon after marrying, Richard and Jeanette moved to Ellsworth, Michigan, for Richard’s first teaching assignment at Ellsworth High School. Jerry Gulleff helped Richard tow their 42’ mobile home on two-lane roads to Ellsworth, a prelude to what would turn out to be a lifelong commitment to trailering, boating and RVs for Richard and Jeanette.To fulfill his sense of patriotic duty, Richard served in the U.S. Military, serving with the Army from 1958 through 1960, traveling to Korea.Richard received a Bachelors of Arts from Central Michigan University in 1962 and a Masters of Arts from Eastern Michigan University in 1971—at a time when even a Bachelors degree was a rare achievement. He achieved a sports scholarship through Custer High School based on his outstanding achievements in various sports including basketball, baseball, and track. For 30 years, he held a record in Michigan for most points scored by a single player during a basketball game.In 1964, Richard and Jeanette moved their family to the Detroit area, where they would reside in Warrendale, Canton, and Highland. Richard was an industrial arts instructor at Redford High School. During most of those years in southeastern Michigan, Richard worked at the Ford Motor Company, first as a draftsman, then later as a quality control engineer for Ford Truck, promoting the launch of the F-series and Ranger/Bronco II during the days of “Quality is Job 1.” Richard retired from Ford after 30 years of dedicated service. Richard and Jeanette then moved to Mesa, Arizona, to enjoy year-round warmth and to be close to other relatives.From working on the S.S. Badger in the 1950s, Richard acquired a love of boating that he shared with his family. Together, they explored the waters of Lake Huron, Lake Erie, the Detroit River, Lake Michigan, White Lake, Cass Lake, Lake Havasu and countless others.Richard and Jeanette also enjoyed traveling with their family in various RVs, from popup tents to trailers to 5th Wheels to visit all 48 contiguous states. They also enjoyed sharing their adventures with their grandchildren to the Glacier National Park, Yellowstone and various other national monuments. One of their excursions led them to Mexico’s Baja Peninsula as part of a RV caravan. They also enjoyed fishing with Jay and Io Stark and other relatives near Chapleau, Ontario in Canada.Richard instilled in his kids a strong sense of self reliance. Whatever the task, his versatility in mechanics enabled him to get the job done correctly. He fixed refrigerators when they needed coolant, completed various home improvement projects, labored through numerous landscaping endeavors, and repaired vehicles at his family’s beck-and-call.Today, he is survived by his wife, Jeanette, his three children Dana Lyene Shanks-Albers and her husband Michael, Diane Stephanie Cavazzoni and her husband Marco, Richard Allen Shanks, Jr. and his wife Lori, his five grandchildren Anna Lyene Kowalski, Lauren Ashley Kowalski, Jonathan Eugene Kowalski, Richard Sidney Shoumake, and Alexander Zachary Cavazzoni, his two great grandchildren Emma Lyene Williams and Glen Christopher Thomas Williams, his mother-in-law Io Stark of Scottville, and several nieces and nephews.On Thursday, May 8, 2014, Richard succumbed to Alzheimer’s. Richard’s friends and family wish to honor Richard’s life via donations made in his name to the Alzheimer’s Association at http://www.alz.org/join_the_cause_donate.asp.A Service of Celebration will be held for Richard at 2 p.m. on Saturday, May 17 at the Stephens Funeral Home in Scottville, with Rev. Jack Conklin officiating. Interment will follow at Fountain Cemetery. Friends may meet with his family for a time of visitation on Friday evening from 5:00 – 8:00 pm, and on Saturday from 1:00 – 2:00 pm at the funeral home.

Richard Allen Shanks was a husband, father, son, grandfather, great grandfather and friend to many who experienced his deep kindness, strong work ethic, and lifelong sense of adventure.Richard was born in the Chicago suburb of Cicero in 1936... View Obituary & Service Information

The family of Richard Allen Shanks created this Life Tributes page to make it easy to share your memories.

Send flowers to the Shanks family.