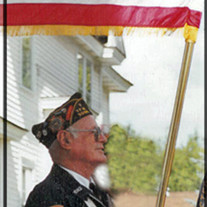 Richard M. “Dick” Smith, aged 91 of Scottville, passed away Monday, May 12, 2014 at Spectrum Health Ludington Hospital. Dick was born on April 15, 1923 in Fountain, the son of George and Mabel (Nash) Smith, and served his country during World War II with the US Army in the European Theatre. Throughout his life, he worked various jobs, including hauling milk for Hansen’s Evergreen Dairy, and for many years as a mechanic for Mason County Central Schools at the Bus Garage. Dick coached Little League Baseball, played and coached Men’s Softball and was recently honored for his years of coaching. He was a Life Member of the Custer Gold Bar VFW Post 5096, his 2nd home, where he was a Past Commander, organized the Honor Guard detail, and was the chief fix-it guy for the club. If something needed to be done or organized, Dick was always ready to help. He was an avid pool player and belonged to the Senior Traveling League in Ludington, Scottville, and Tallman, and was a master craftsman woodworker, blessing his family and friends with his works of art. When not at the VFW, or playing pool, Dick could usually be found at home, working on one of his beloved Ford Tractors. Dick was preceded in death by his parents, his wives Gloria Strejcek, Mary Ann in 1969, and Lucille Corey in 1998, his son Charles in 2011, 4 brothers, and 4 sisters. Dick will be greatly missed by his daughter Cathy Grenell and her husband Butch of Muskegon, his son George Smith and his wife Kathi of Scottville, his daughter-in-law Shirley Smith of Ludington, his grandchildren Richard (Nancy) Grenell, Tammy (Dean) Guiles, Marty (Missi Darwin) Grenell, Nikki (Eric) Van Pelt, J.C. Smith, and Alyssa (Bennie) Mercado, numerous great-grandchildren and great, great-grandchildren, several nieces and nephews, and many great friends.Funeral services will be held for Dick at 1:00 pm on Friday, May 16 at the Stephens Funeral Home in Scottville, with his good friend, Rev. Norman Letsinger officiating. Burial will follow with Honor Guard services at Brookside Cemetery. Friends may meet with his family for a time of visitation on Thursday evening from 5:00 – 8:00 pm at the funeral home. Those who wish to make contributions are asked to consider the Custer Gold Bar VFW Post 5096 in Dick’s memory.

The family of Richard Milroy Smith created this Life Tributes page to make it easy to share your memories.