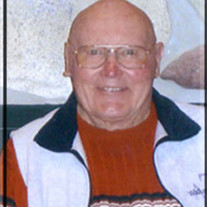 SERVICES:A Celebration of Life for Dick will be held later this summer. OBITUARY:Richard “Dick” Wicklund, 91, of Custer, died Friday, April 13, 2012 at Oakview Medical Care Facility. Dick was born June 25, 1921 in Detroit to Alfred and Winnifred (Petersen) Wicklund. The family moved to the Fern area when he was two years old. He attended Fern School; graduated from Custer High School in 1937; attended County Normal School; graduated from Central Michigan University in 1967 with a Bachelor of Arts Degree; and received his Masters Degree in 1973. He taught at Stewart and South Hamlin Schools, then became Principal of Nordhouse, South Hamlin and Lakeview Schools. He retired in 1979 from the Ludington school system with 24 years of service and was a member of the Michigan Association of Retired School Personnel.Dick married Audrey Allison on June 14, 1941. They celebrated 67 years together before she preceded him in death on May 23, 2008. He enjoyed bow and gun hunting and fishing with his wife and family. Before retirement, summers were spent at their cottage on Long Lake. After retirement, they enjoyed spending winters in Indio, CA. Dick enjoyed watching his son Barry race motorcycles in California and watching his son Dale fly model airplanes at the Twisted Sticks Airfield in Ludington. He loved attending activities of the grandchildren and great grandchildren.Dick was preceded in death by his parents, his wife Audrey, two brothers, Orren and Roger and his sister-in-law Darlene. He will be lovingly missed by his sons Barry (Judy) of Palm Springs, CA and Dale (Janice) of Custer; grandchildren Brandyn, Brent, Jamie, Deena (Gary) Brigham, Rich (Mary) and Kristina (Jake) Ederer; great grandchildren Devinney, Kendyll, Zander, Hannah, Ryan, Noah, and Abigail; brother Gordon and many nieces and nephews.The family wishes to thank Oakview Medical Care Facility for the wonderful care given to Dick.

The family of Richard D. Wicklund created this Life Tributes page to make it easy to share your memories.

SERVICES:A Celebration of Life for Dick will be held later this...

Send flowers to the Wicklund family.