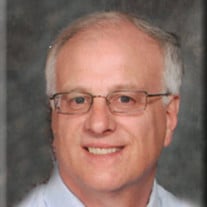 PASTOR RICK'S OBITUARY:Rev. Ricky J. VanHaitsma, aged 64 of Scottville was welcomed into glory early Tuesday morning, July 23, 2013. Rick was born on December 5, 1948 in Grand Rapids to Peter J. and Lois (Post) VanHaitsma, and graduated from Byron Center High School with the class of 1967. Rick earned his Bachelor of Arts Degree from Hope College in 1971, and his Master of Divinity Degree from Western Theological Seminary in 1975. On June 12, 1971, he married Laurel B. Dekker in Homewood, Illinois, and they have celebrated 42 years together. Rick began his ministry at Beechwood Reformed Church in Holland before moving to Scottville in 1987, where currently serves as Pastor of Mason County Reformed Church. Rick was an avid sports fan enjoying any sport that involved a ball. He served as Chaplain for the Mason County Central Football team, and would often be seen cheering on MCC, MCE, and Ludington sports teams. He was an avid Detroit Tiger fan, but nothing compared to his love for Hope College and the Flying Dutch. Rick was a member of the Mason County and Scottville Ministerial Associations and served as Treasurer of the Scottville Ministerial Association for many years. He had a tremendous heart for the people of Mason County and dedicated himself to spreading the gospel of Jesus Christ. Rick was preceded in death by his father Peter, and his brother Rudy Jack VanHaitsma. He will be greatly missed by his wife Laurel, his sons and their wives Bryan and Erika VanHaitsma of Scottville, Jared and Lori VanHaitsma of Norwich, Connecticut, his beloved grandchildren Rina, Micah, and Aliyah of Scottville, and Eben, Aliza, Nora, and Zane of Norwich. He will also be missed by his mother Lois VanHaitsma of Byron Center, his brothers Larry and Sally VanHaitsma of Byron Center, and Dennis VanHaitsma of Holland, his aunt Kathryn Post of Wyoming, his uncle Marvin Bolhuis, and several nieces and nephews.A service of Praise and Worship will be held at 1:00 PM on Saturday, July 27 at the Mason County Reformed Church in Scottville. Friends may meet with his family for a time of visitation on Friday from 2-4 & 7-9 PM, and on Saturday from 12:00 noon until time of services all at the church. Those who wish to make memorial contributions are asked to consider the Mason County Reformed Church Building Fund, and the Covenant Christian School Building Fund.

The family of Rick John VanHaitsma created this Life Tributes page to make it easy to share your memories.

Send flowers to the VanHaitsma family.