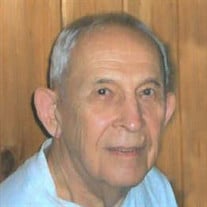 Robert L. Boone Sr., aged 92 of Branch passed away on Thursday, November 20, 2014 at his home overlooking the Pere Marquette River. Robert was born on July 4, 1922 in Traverse City, the son of Leo and Susan (Forten) Boone, grew up in Muskegon and graduated from Muskegon High School. He served his country during World War II with the U.S. Army Air Corps as a B-24 Bomber pilot in the North African – Italy Theatre. Upon his discharge, he returned to Muskegon and married Rose Mary Rogers on September 14, 1946 at St. Jerome’s Catholic Church in Scottville. They have celebrated 68 years by each other’s side. Robert worked as a Pattern Maker for various companies around Muskegon, most recently Paragon Pattern & Manufacturing. He retired in 1987 and moved to their home on the PM River in Branch where he loved to spend time hunting, fishing, gardening, and spoiling his grandsons. Robert reunited with his bomber crew, and he and Rose have enjoyed traveling all over the United States attending their yearly reunions. Robert will be greatly missed by his wife Rose Mary, his daughter Bridget Ann of Ludington, his son and his wife Robert L. and Kerrie Boone Jr. of Muskegon, his grandsons Keegan and Keldon Boone, his sisters-in-law Betty Boone of Muskegon, and Loretta Nichols of Scottville, his brother-in-law Lee Hausler of Jackson, and numerous nieces and nephews. He was preceded in death by his parents, his son William George, his brothers Woodrow and Kenneth, his sisters Georgetta Mongeau, Dorothy Liebeck, and Donna Wood. The Mass of Christian Burial will be celebrated at 11:00 am on Tuesday, November 25 at St. Mary’s Catholic Church in Custer with Rev. Daniel R. DePew as celebrant. Burial will take place at Pere Marquette Cemetery in Ludington. Friends may meet with his family for a time of visitation on Tuesday morning from 9:30 am until time of mass at the church. Those who wish to make contributions in Robert’s memory are asked to consider Harbor Hospice, or the American Cancer Society.

Robert L. Boone Sr., aged 92 of Branch passed away on Thursday, November 20, 2014 at his home overlooking the Pere Marquette River. Robert was born on July 4, 1922 in Traverse City, the son of Leo and Susan (Forten) Boone, grew up in Muskegon... View Obituary & Service Information

The family of Robert Boone Sr. created this Life Tributes page to make it easy to share your memories.

Send flowers to the Boone family.