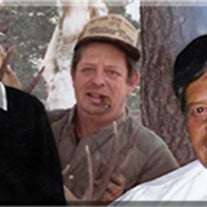 Robert's Life Story:All who knew Robert Burns would agree that he was the heartbeat of wherever he was. He had a zest for life that was contagious, and his love for the water was easy to see. A more devoted family man would be hard to find as... View Obituary & Service Information

The family of Robert Noel Burns created this Life Tributes page to make it easy to share your memories.

Robert&#39;s Life Story:All who knew Robert Burns would agree that...

Send flowers to the Burns family.