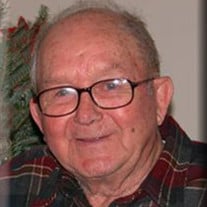 ROBERT'S OBITUARY:Robert A. Conrad passed away March 18, 2012 at his home in Amber Township. He was born March 9, 1921 in Mason County to Archie and Mildred (Cameron) Conrad. Bob graduated from Scottville High School and later attended Michigan State University. He enlisted in the Army during WWII, taking part in the Battle of the Bulge. After returning from the war, Bob married Ann June Peterson in Ludington in 1946. Bob worked briefly for the Scottville Ford Garage before he and Ann had the opportunity to buy the Raymond Conrad farm in Amber Township. For more than 60 years, Bob was a farmer. He loved his work and was happiest on the seat of a tractor, truck or four-wheeler as he worked and observed the family land. And it was on this family farm that Bob and Ann raised their four children and passed on an appreciation for farming and nature. Throughout his life, Bob and Ann traveled throughout much of the U.S. They also enjoyed camping with their friends, square dancing with the Belles and Beaux group, and visiting with relatives. Bob was a former member of the Mason County Soil Conservation and formerly the Amber Township Supervisor. He was also a member of Emanuel Lutheran Church and the Mason County Farm Bureau. Bob was preceded in death by his wife Ann in 2010 and his son David in 1977. He is survived by daughter Barbara (Robert) Ratcliff of Brooklyn, MI, daughter Linnea (Harvey) Miller, son Peter (Connie) Conrad, both of Amber Township, ; grandchildren Matthew Ratcliff, Aric (Jeanne) Miller, Lindsey Miller, Christopher Conrad, Kerri Conrad, great-granddaughter Avery Ann Miller, sisters Betty Wood and Mary Lou (Donald) Schulz, sister-in-law Ethel Lister, and eleven step-grandchildren and great grandchildren as well as many nieces and nephews. Funeral services will be held for Bob at 3:00 pm on Saturday, March 24 at the Stephens Funeral Home in Scottville. Burial will follow at Rickey Cemetery in Amber Township. Friends may meet with his family for a time of visitation on Friday afternoon from 2:00 – 4:00 pm at the funeral home, and on Saturday afternoon from 2:00 pm until time of services. Those who wish to make memorial contributions are asked to consider Emanuel Lutheran Church, the Mason County Reformed Church, or to a charity of the donor’s choice.

ROBERT'S OBITUARY:Robert A. Conrad passed away March 18, 2012 at his home in Amber Township. He was born March 9, 1921 in Mason County to Archie and Mildred (Cameron) Conrad. Bob graduated from Scottville High School and later attended Michigan... View Obituary & Service Information

The family of Robert Conrad created this Life Tributes page to make it easy to share your memories.

Send flowers to the Conrad family.