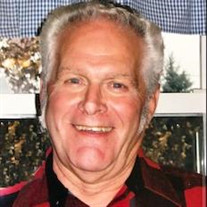 Greater is he that is in you than he that is in the world. 1 John 4:4 Robert Graham Edwards was born on Tuesday, March 28, 1939 in the tiny mining community of Bitner, Pennsylvania. Robert was the 1st born son of John and Mildred (Jordan) Edwards, a family that would grow to include brother Jack and sisters Carol and Cathy. Robert’s father drove truck for the coal mines while his mother stayed at home raising their family. Sadly, his mother Mildred passed away when Robert was just 8 years old. His father later remarried and that union welcomed the addition of stepbrother J.R., and stepsister Jean Robert into the family. Robert was small in stature but earned a reputation for being a scrappy young man. He often displayed his toughness by boxing with the Golden Gloves and at the urging of his father, his uncle, and a local Judge, it was strongly recommended he consider putting his toughness to use with the United States Coast Guard. Robert’s first assignment was at the Coast Guard station in Ludington, Michigan on the shores of Lake Michigan. While stationed there in 1958, Robert had the opportunity to attend the Scottville Harvest Festival. It was at this event he would meet the love of his life Joan Whitaker. They married on July 11, 1959 at St. Mary’s Catholic Church in Custer and began a wonderful journey that spanned the next 57 years. Their family would grow to include daughters Tammy and Denise and son Troy, six grandchildren, and seven beautiful great-grandchildren. Robert’s service in the Coast Guard included stops at Manistee Mooring; US Woodbine in Grand Haven; the West Point Light Station at Fort Lawton, Washington, which was his favorite assignment; on the Coast Guard Cutter Fir based in Seattle, Washington; at the Tacoma, Washington Recruiting Station; and finally at the Ashtabula Station in Ohio on the shores of Lake Erie. Robert retired as Chief Boatswain’s Mate in 1978 after a 22 year career with the Coast Guard, and he, Joan and their family moved back to Mason County, settling in Custer. He didn’t stay retired very long though, taking over a sales and delivery route for Ludington Beverage. Robert retired a second time in 2004 after working 25 years for the Reed family. Family and Faith were very important to Robert. A quiet leader, Robert served Beacon Ministries for 25 years as a member of the Board of Trustees, helped with various deacon tasks, and assisted during worship, operating the sound board. He especially looked for ways to support daughter Tammy in her ministry at Beacon. Robert was a founding member of the Full Gospel Men’s Ministry in Mason County. He always woke early for the men’s meetings, often dressing in the dark so he didn't wake Joan. One meeting he stood out more than others when he arrived and discovered that, in the darkness, he had dressed with one black boot and one brown boot. If his family needed help, Robert would be there whatever the task. When his brother-in-law Joe Whitaker had a band called “Custer’s Last Stand,” Robert would help out as a set-up guy while the band was preparing to entertain. A memory his grandsons will carry with them forever was a time when they were helping Grandpa place an air conditioner in an upstairs room. While setting the unit, Robert lost his grip sending the air conditioner crashing to the ground. The boys were wide eyed expecting a fiery response only to be surprised by Grandpa’s hysterical laughter. Robert loved horses and his pride and joy was the Egyptian Arabian he purchased in his 40’s. He also adopted two wild mustangs and enjoyed training and caring for them. A cowboy at heart, Robert could always find time to watch an old western movie, or his favorite TV show “Gunsmoke.” He also like to spend time working with leather, restoring cars, deer hunting, or simply working around his yard and garden. Robert Edwards passed away peacefully on Friday, May 19, 2017 at his home in Custer and entered into the presence of the Lord. He was preceded in death by his daughter Denise Edwards in 2005, his parents, his brother Jack Edwards, his sister Jean Connelly, and his brother-in-law Joseph Whitaker. Robert will be greatly missed by his wife Joan, his daughter Rev. Tammy Bacon and husband Ron of Custer, his son Troy Edwards and fiancée Jennifer McWilliams of Ludington, his grandchildren Mindy (Shaun) Reed, Dan (Ashley) Bacon, Adam Edwards, Austyn Keson (Fiancée Donielle Wright), Zac Edwards, and Makana Edwards, his great-grandchildren Kirsten, Haley, and Zoe Bacon, Toby and Max Reed, Dayton Lyewski, and Tessa Keson, his brother J.R. (Brenda) Linteman of Niles, MI, his sisters Carol Edwards of Warren, Ohio, and Cathy Brown of Millboro, VA, his brother-in-law Daniel (Christine) Whitaker of Alabama, his sisters-in-law Cheryl Edwards of Ravenna, OH, Linda Whitaker of Custer, Suzy (Jerry) VanderWall of Grand Haven, and Jane (Ed) Myer of Ludington, and numerous nieces and nephews. Funeral services with Honor Guard rites will be held for Robert at 7:00 pm on Tuesday, May 23rd at Beacon Ministries with his daughter, Rev. Tammy Bacon officiating. Burial will take place at St. Mary’s Cemetery in Custer. Friends may meet with his family for a time of visitation on Tuesday evening from 6:00 – 7:00 pm at the church. Those who wish to remember Robert with a memorial donation are asked to consider the family.

Greater is he that is in you than he that is in the world. 1 John 4:4 Robert Graham Edwards was born on Tuesday, March 28, 1939 in the tiny mining community of Bitner, Pennsylvania. Robert was the 1st born son of John and Mildred (Jordan)... View Obituary & Service Information

The family of Robert G. Edwards created this Life Tributes page to make it easy to share your memories.

Send flowers to the Edwards family.