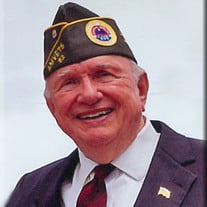 Robert W. "Bob" Gancarz, age 83, longtime resident of the Fountain-Free Soil area and loving husband of Deanne (Mathews) Gancarz, died peacefully with family members present while in Hospice care at Spectrum Health Ludington Hospital on January 3, 2020. He had been experiencing significant health complications since late 2017. Bob was born on November 2, 1936 to parents Walter and Kathryn (Savich) Gancarz in Detroit, Michigan. He attended the Free Soil elementary school during Kindergarten and half of first grade before his family moved to Muskegon, where he mostly went to Catholic schools through his junior year of high school. The family returned to Free Soil for his senior year and he graduated from Free Soil High School in 1955. Bob earned varsity letters as a student-athlete while playing football (in Muskegon), basketball, and baseball and became a lifelong sports fan -- especially Detroit Tigers baseball and Notre Dame football. Bob also greatly enjoyed deer hunting and steelhead fishing. Immediately after high school, Bob volunteered for military service and was placed in the United States Navy. While in the Navy, he proudly served his flag and country aboard the destroyer tender U.S.S. Sierra (AD-18). Upon honorable discharge from the Navy, Bob attended Northwestern Michigan College (NMC) in Traverse City for a year and then worked for two years as a carpenter in Las Vegas, Nevada. Returning to complete his associate's degree at NMC, he met the love of his life, Deanne. They married on March 31, 1962. Bob graduated from Central Michigan University with bachelor's and master's degrees and became a public-school educator, spending the bulk of his thirty-three-year career educating and inspiring young people as a social studies teacher at O.J. DeJonge Junior High in Ludington before retiring in 1997. Notably, on a classroom wall Bob displayed a poster quoting the early American education pioneer Horace Mann. The poster stated, "Be ashamed to die until you have won some victory for humanity." He also created and taught the popular exploratory courses Great Moments in Sports and Field & Stream, which included class field trips to professional sporting events and an annual camping excursion at the Ludington State Park. While in retirement, Bob worked tirelessly to recognize military veterans for their service to our country. He spearheaded numerous projects in this pursuit, including the designation of U.S. 10-31 between Ludington and Scottville as Veterans Memorial Highway; designation of a stretch of M-55 between Manistee and Cadillac as Gold Star Mothers Memorial Highway; placement of memorial signage honoring Ludington's own Congressional Medal of Honor recipient William "Bill" Charette; construction and refurbishment of various memorial monuments in Ludington and Manistee; and facilitating numerous veterans events at area schools and other organizations. He was a very active member of seven veterans' organizations, including thirteen years of service as Commander of the Catholic War Veterans Steven T. Duchon Post 1847 in Manistee. Also, he was Michigan's 2010 Catholic War Veteran of the Year. The family would like to recognize wife Deanne for the tremendous strength and unconditional love she exemplified as a caretaker of Bob throughout his extended illness. Bob will be greatly missed by his devoted spouse, Deanne; daughter Jacqueline (Thomas) Ameluxen; daughter Kathryn (Kenneth) Cerabona; daughter Susan Niederkorn; son Gabriel (Michelle) Gancarz; grandchildren Patrick and Sydney Ameluxen; and grandchildren Elizabeth and Mark Cerabona. Bob was preceded in death by his parents as well as younger sister Helen Gancarz and younger brother Jim Gancarz. The Mass of Christian Burial will be celebrated for Bob at 11:00 am on Tuesday, January 7 at St. John Cantius Catholic Church in Free Soil with Rev. Daniel DePew as Celebrant. Military Honors will immediately follow the service with burial to take place at St. John Cantius Cemetery. Friends may meet with his family for a time of visitation on Monday evening from 5:00-8:00 pm and on Tuesday morning from 10:00-11:00 am all at St. John's Church and the Rosary will be prayed for Bob Monday evening at 7:00 pm. Those who wish to remember Bob with a memorial donation are asked to consider contributing to the Catholic War Veterans Post 1847. Donations may be mailed to post Treasurer Mike Drake at 11127 Vitaz Rd, Brethren, MI 49619.

The family of Robert W Gancarz created this Life Tributes page to make it easy to share your memories.

Send flowers to the Gancarz family.