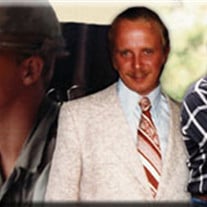 LIFE STORY:Unconditional in his love, Robert Rummer II was a man of solid integrity who gave his all in everything he did, keeping about him an unwavering and optimistic demeanor. With strong values as his guide, he accomplished many things... View Obituary & Service Information

The family of Robert Lee Rummer II created this Life Tributes page to make it easy to share your memories.

LIFE STORY:Unconditional in his love, Robert Rummer II was a...