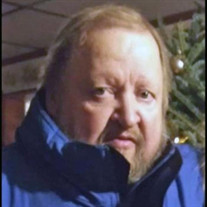 Robert Eugene Stokes Sr., aged 69 of Fountain passed away on Tuesday, November 9, 2021 at Munson Healthcare Manistee Hospital. Robert was born on January 21, 1952 in Ypsilanti, the son of Bernice Eugene and Margaret Delores (Loukiainen) Stokes. After moving to Mason County, Robert worked for Kaines Manufacturing until his retirement in 2014. On February 28, 1970, he married Patricia Ann Blankenship in Ypsilanti and she preceded him in death on February 4, 1999. Robert was also preceded in death by his father Bernice, and his daughter Tanya Stokes. To say Robert loved Hot Rods and classic cars would be an understatement. When he wasn’t spending time rebuilding a classic, he could usually be found attending a car show and talking shop picking up new tricks and ideas on how to rebuild his next project. Robert also enjoyed riding his Harley often to local BBQ’s or hanging out with friends and family around a bonfire. He was also quite an artist, playing the banjo and writing poetry in his younger days. Robert will be greatly missed by his children Christina (Tony) King of New York, Robert Stokes Jr. and companion Tinnea of Florida, and Sharon (Mike) Makowski of Manistee; his companion of several years Patricia Lopez; his former son-in-law Inocencia (Angie) Covarrubias of Scottville; his grandchildren Angelica Covarrubias, Alex Covarrubias and companion Tatiana Ramirez, Tony Covarrubias, Roberta Covarrubias, Jessica Nehm, Mason Nehm, Brandon Nehm, Rayanne Stokes, Rosie Stokes, Robert Stokes III, Alecia (DJ) Raspotnik, Taylor Makowski, and Rachael (Paul) Hayes; his great-grandchildren Phoenix, Noah, Calliope, Mason, and Addison; his mother Margaret Stokes of Ypsilanti; his brothers and sister Kathy Grey, David Grey, James (Delta) Stokes, and Daniel (Deanne) Stokes all of Ypsilanti; and many nieces, nephews, aunts, uncles, and cousins. Funeral services will be held for Robert at 1:00 pm on Wednesday, November 17 at Wyman Funeral & Cremation Services in Scottville with burial to follow at Fountain Cemetery. Friends may visit with his family on Tuesday evening from 6:00 – 8:00 pm at the funeral home. Those who wish to remember Robert with a memorial donation are asked to please consider the Fountain Fire Department in appreciation for all the assistance they have provided Robert.

The family of Robert E. Stokes Sr. created this Life Tributes page to make it easy to share your memories.

Robert Eugene Stokes Sr., aged 69 of Fountain passed away on...

Send flowers to the Stokes family.