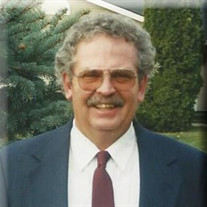 Roger Dean Barnard, age 68 of Traverse City, former resident of Ludington passed away peacefully on Friday, August 22, 2014 at the Munson Hospice House. Roger was born on December 30, 1945 in Saginaw, the son of Harry and Ella Barnard. After the birth of his sister Lois, the family moved to Scottville in 1949 where he was raised and graduated from Mason County Central High School with the class of 1964. Roger furthered his education earning his teaching degree from Michigan State University in 1969, and began his 30 year career in teaching with the Detroit Public Schools. The following year, he began teaching for the Ludington Area Schools, retiring in 1999 after 29 years of service to the district. Roger also earned his Master’s Degree from Central Michigan University in 1979. In addition to his passion for teaching, Roger also had a deep love for music. This love was manifested in his loyalty and enjoyment in practicing and performing in the big band sound of The General Assembly. At the time of his passing, Roger was the longest, living, continuous member of The General Assembly having started with the big band in 1970. Roger was also a member of the Scottville Clown Band and enjoyed attending musical performances of others as well as impromptu “jam” sessions. A father of three, Roger will be greatly missed by his wife Kathleen Keating of Traverse City, his daughter Sara Barnard and her mother Mary Ann Neil of Mt. Pleasant, and granddaughter Marcilyn Jarrett Rose Barnard who lives with Sara, his daughter Hilary Barnard and her mother Gale Wright of Casper, Wyoming, his sister Lois (Bill) Lemcke of Mt. Pleasant and their sons Eric of Seattle, WA and Marc of Nashville, TN, his stepdaughter Jennifer (Rob) Gates and step grandson Alex Gates all of Littleton, Colorado, and his dear friend and caregiver Mary Elizabeth Barnette of Traverse City. Roger was preceded in death by his parents Harry and Ella, and his son Jarrett. Roger was a kind, caring, giving, and loving man. His love of God and family were reflected each day of his life and will become a lasting tribute to his spirit. When asked how he wanted to be remembered, he replied, “I was their friend passing through.” Roger will be lovingly remembered by his family and many great friends. A service commemorating Roger’s life will be held on Thursday, August 28 at 11:00 AM at Our Savior Lutheran Church in Scottville, with Rev. James Schroeder officiating. Graveside services will follow at Brookside Cemetery with a luncheon to follow at the church. Friends may meet with his family for a time of visitation on Wednesday, August 27 from 3:00 – 5:00 PM and from 7:00 – 9:00 PM at the STEPHENS FUNERAL HOME in Scottville, and on Thursday morning from 10:00 AM until the time of the service at the church. Those who wish to make contributions in memory of Roger are asked to consider Munson Hospice House or the Roger Barnard Music Scholarship Fund at Ludington Area Schools.

Roger Dean Barnard, age 68 of Traverse City, former resident of Ludington passed away peacefully on Friday, August 22, 2014 at the Munson Hospice House. Roger was born on December 30, 1945 in Saginaw, the son of Harry and Ella Barnard. After... View Obituary & Service Information

The family of Roger D. Barnard created this Life Tributes page to make it easy to share your memories.

Send flowers to the Barnard family.